Boy, Age: 11
Region: Eastern Europe
Primary Diagnosis: Genetic Condition (non-DS)
Coffin-Lowry Syndrome
**** I am eligible for a $5000 Older Child Grant ****
Grant funds depend on available funding; the link above, shows the current available amount!
To inquire about this child, email childinquiry@reecesrainbow.org ***
Available to Large Families, Available to Older Parents, Available to Single Mothers
Ollie is now living in foster care. He is physically well developed. He has good coordination of his hands and feet. He walks without falling, and can run as well. Climbs up and goes down by the stairs when holding an adult or the railing. He can play with cubes by putting them and taking them out of a cup, but has some problems manipulating with smaller objects. He cannot eat and dress by himself yet, but does make attempts. He understood almost everything and fulfils small tasks. He likes playing hide and seek. He hides behind the door and when he is found, he laughs and stomps his feet. He is interested in musical cartoons and copies the movements of the actors.

*There is a younger child that is believed to be Ollie’s younger brother. However, they are NOT listed as needing to be adopted together. The other child is listed as Ozzie. 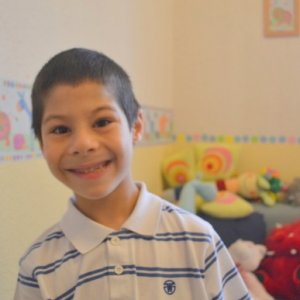 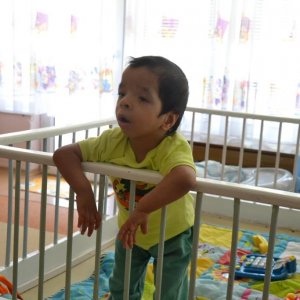