It is our true belief that there is a “forever family” for each of our waiting orphans with special needs.

The purpose of Reece’s Rainbow is to raise funds as adoption grants, to help potential adoptive families with the high cost of giving these children the life they so richly deserve.Your donations and advocacy turn the child on the left into the child on the right! This page includes the profiles of those children with larger grant funds available.

Put on your WARRIOR shoes and help us find families! PLEASE SHARE THIS PAGE, that others will see it and take that leap of faith to save a child in need.

Sibling Group
Ages: 5, 7, 9
Country Code: EE-1: Adoptions are not currently being processed in this country. Further information can be given by an adoption agency.
Region: Eastern Europe
Primary Diagnosis: HIV or Hep
Elaine is the youngest; HIV, Other disorder of speech; Abnormal results of cardiac function
Although there are no official holds in this country, this child has a hopeful family who has a completed homestudy.
$7,507.30
has been donated towards the cost of my adoption!
Inquire About This Child
Available to Large Families, Available to Older Parents, Siblings
Sizable Grants $7,500+
The boys are both listed as healthy.  All three should be adopted together. 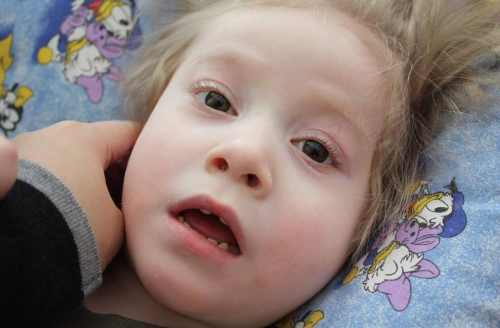 Girl, Age: 10
Country Code: EE-1: Adoptions are not currently being processed in this country. Further information can be given by an adoption agency.
Region: Eastern Europe
Primary Diagnosis: Epilepsy/ seizure disorder
Congenital malformation of the central nervous system; symptomatic epilepsy; atactic syndrome; tetraparesis; porencephalia
$9,565.68
has been donated towards the cost of my adoption!
Inquire About This Child
Available to Large Families, Available to Older Parents
Sizable Grants $7,500+ 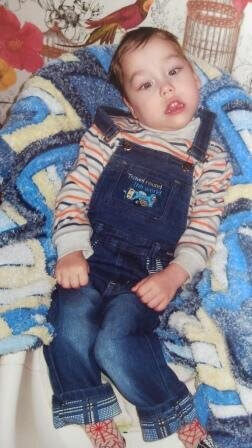 Boy, Age: 7
Country Code: EE-1: Adoptions are not currently being processed in this country. Further information can be given by an adoption agency.
Region: Eastern Europe
Primary Diagnosis: Hydrocephalus
Congenital malformations of corpus callosum; Communicating hydrocephalus; ther generalized epilepsy and epileptic syndromes; congenital deformities of hip; congenital deformities of chest
$8,494.50
has been donated towards the cost of my adoption!
Inquire About This Child
Available to Large Families, Available to Older Parents
Sizable Grants $7,500+ 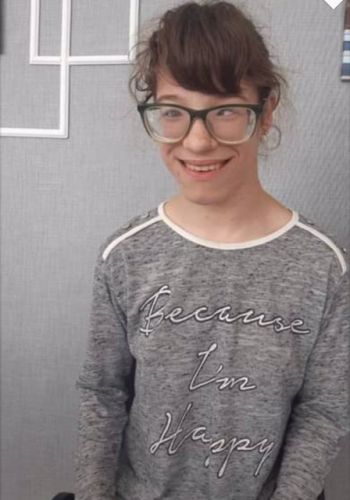 Girl, Age: 15
Country Code: EE-1: Adoptions are not currently being processed in this country. Further information can be given by an adoption agency.
Region: Eastern Europe
Primary Diagnosis: Blind / VI
Severe mental delay; congenital malformation of retina; congenital malformation of optic disc; concomitant strabismus; flat feet
$8,150.79
has been donated towards the cost of my adoption!
Inquire About This Child
Available to Large Families, Available to Older Parents
Sizable Grants $7,500+
Her biggest problem she cannot see good and that is why she is significantly delayed.  By some reason she cannot have her glasses on when she needs them permanently. Instead she gets them only for classes.

Update Dec 2021, from someone who met both Hazel & Ivory:  They are really tiny young ladies, so sweet and giggly. They stopped by the orphanage director’s office to say hello.  Hazel is practically without special needs, and she is inseparable from Ivory.   Since Ivory is blind, Hazel watches out for her little “sister”.   So sweet. 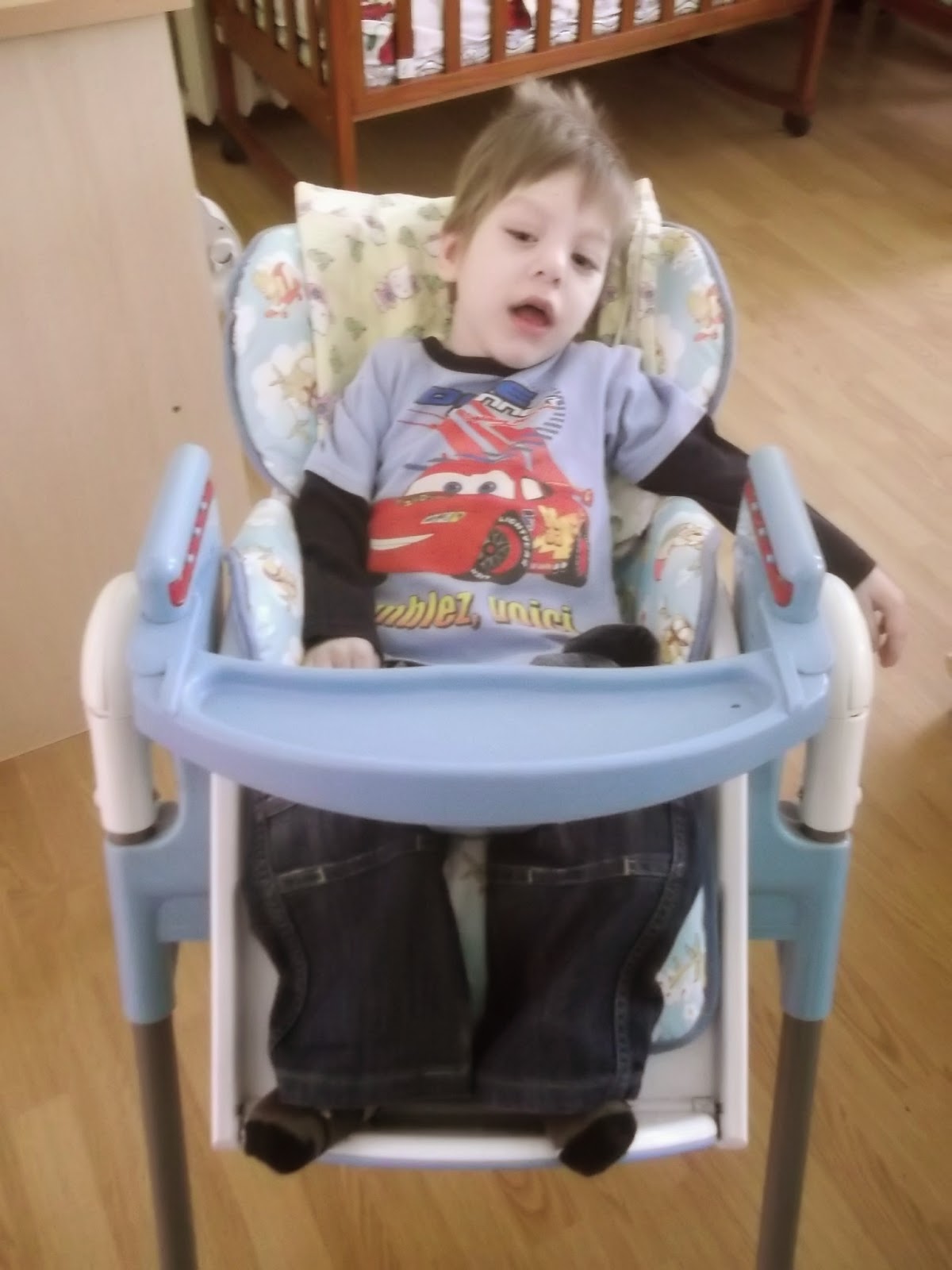 Boy, Age: 12
Country Code: EE-1: Adoptions are not currently being processed in this country. Further information can be given by an adoption agency.
Region: Eastern Europe
Primary Diagnosis: Cerebral palsy
Cerebral palsy. taking anticonvulsant therapy
$8,749.10
has been donated towards the cost of my adoption!
Inquire About This Child
Available to Large Families, Available to Older Parents
Sizable Grants $7,500+
Twin boys: Updated pictures and medical info April 2015

His twin brother, Caleb, passed away in 2017

From someone who met them in 2013:
(Brother 1) He is in with a much younger groupa. He goes outside twice daily when it is nice, and this orphanage does physical therapy five times a week. He makes eye contact, but is in his own little world until you talk directly to him. He appears kind of zoned out, and then I said his name and stroked his cheek and his whole body came to life, just longing to be touched and tickled. He arched his back and smiled, but I wasn’t allowed to pick him up. He has grown too long for his stroller. I put a velcro wrist rattle on him and he purposefully moved his left arm to interact with it immediately. He is well nourished there, but he will really need a mama’s touch to help him grow. His teeth look like they are in great shape. He uses his arms, but I did not see him move his legs, though he was certainly wiggling from one side to the other and is a kid who would really like to be on the move! He is not in the same groupa as his brother. Kids are generally grouped by what they are eating, and his brother was in the groupa for kids doing formula and purees. I think he may be on only formula still. It was so hard to leave him behind!

(Brother 2) Several days later, I saw who I thought was the same child in a different stroller, but the nannies corrected me when I called him by his brothers name, slowly communicating that this was his twin brother. They look SO much alike! The first day I saw him, he was badly in need of a diaper change and I showed the nannies. He was laying flat on his back in the outdoor playpen, and when I came back to return my daughter to the groupa, he was still there an hour later, unchanged in diaper and position. The next day I saw him, though, one of the sweet nannies was playing music on her ipod, and he was laying close to her in a stroller. Although he didn’t interact with the music, he was very quick to respond to my voice. The second I stopped talking, he stopped smiling and zoned out again. But, he was so responsive to touch and baby talk! He pushed his body around in the stroller with his legs AND arms, and had a lot of good neck strength. I wouldn’t be surprised at all if he is only being limited by the assumptions of his diagnosis. As we left our daughter’s groupa for the last time, we saw him being lovingly carried down to his physical therapy appointment. I think it was a sign of good things to come for these boys!

Neither boy is using meaningful speech, though both babble. Videos available. Wonderful region to adopt from, especially if one parent needs to stay alone for a time. 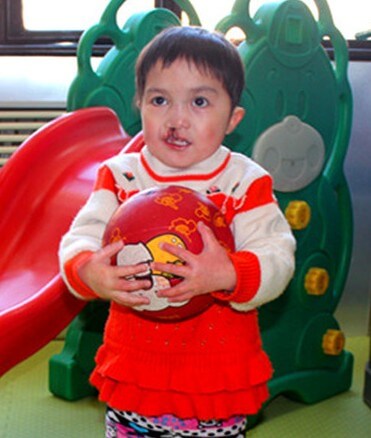 Girl, Age: 12
Country Code: Asia.1: This country is currently not actively processing adoptions, due to COVID.
Region: Asia
Primary Diagnosis: Craniofacial disorder
Cleft lip and palate; congenital heart defect (post-op)
$8,706.55
has been donated towards the cost of my adoption!
Inquire About This Child
Available to Single Mothers
Sizable Grants $7,500+
Grace was abandoned by the train station when she was ten days old and has been living in an orphanage ever since. Grace was born with a cleft lip and palate, for which her first surgery will occur in May. She also had a congenital heart defect which was corrected this past summer. She does not take any cardiac medication but she sometimes pants and her lips become blue after strenuous exercise so her cardiac issues may not be fully resolved.

Grace is reported to have normal intelligence, potty trained, and she walks and runs just fine. She dresses herself, speaks in 3 – 5 word sentences, likes to sing and play games with other children.

Update from 2016: At 6 years old Grace enjoys looking at books, playing with her friends and has a favorite stuffed toy. She has great self help and fine motor skills, she can dress herself, including jacket and shoes, she can draw lines and shapes. She is an extroverted girl and she really enjoys playing games with her peers. She has many favorite foods, dumplings, noodles, fruit and many more. She had a surgery to repair her cleft lip already, but her cleft palate has not been repaired yet. She studies preschool, she can sing, dance, draw, string beads, and put clothes on dolls. Her upper limbs are flexible, she can walk and run, but not very steadily. She is active and gets along well with other kids, and often helps other younger kids. 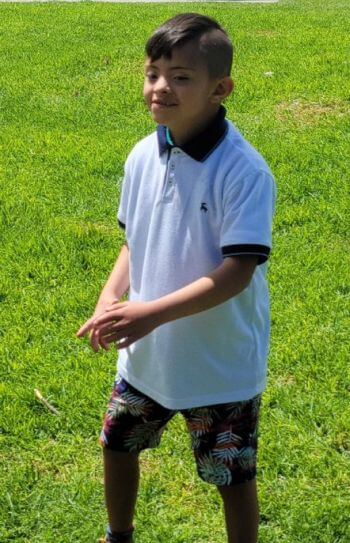 Boy, Age: 9
Country Code: LA-2
Region: Latin America
Primary Diagnosis: Down syndrome
Down syndrome, potential autism diagnosis
*** I am eligible for an additional $5,000 Grant from Reece’s Rainbow! Through 2023, children with Down syndrome ages 6-9 are eligible for a $5000 Older Child Grant! ***
$7,522.36
has been donated towards the cost of my adoption!
Inquire About This Child
2022 MACC, Available to Large Families, Available to Single Fathers, Available to Single Mothers
Sizable Grants $7,500+
Jais is generally healthy — it is reported he needs glasses. Jais is calm and loving towards those around him. He expresses his desires easily.  A specific agency has a $3,000 grant available for his adoption.

Update Feb 2020: This file is old, so the information is from one year ago. He is verbal. He attends speech therapy. He has some difficulty pronouncing some words. His speech is delayed according to his age. A year ago he was using diapers, but he was telling when he had to get it changed because he felt discomfort. He is very affectionate, very loving, and respectful with adults. He follows norms and rules. He was sometimes pulling the hair of peers at school. The neurologist states he is a child that has progressed a lot since he has been receiving therapies and recommended that he not stop them.

Agency staff met Jais in July 2022: Jais is a cute little guy who is described as calm and loving towards those around him. He expresses his desires easily. Jais is currently attending school and is in the second grade. It has been a process for him to adjust to being with other children. Jais likes music and he dances to the rhythm. He likes to be cuddled and touched, especially by his foster parents. In addition to having Down syndrome, Jais likely also has Autism. Due to his potential autism diagnosis, Jais has a hard time with transitions, changes, and strangers. He loves cars, especially being inside one! His foster parents take him for vacations, and he enjoys going to the beach. He loves being in the car so much, that he doesn’t even mind if he’s in there for hours…so road trips are a go! Jais can say the words, “mom,” “dad,” “water,” “ayyaya” and “hey.” Jais sleeps through the night, but has a special position that he feels most comfortable in. He likes to first fall asleep with his foster mother in her bed and then be taken to his bed. Jais wakes up at 5:30 a.m. and cuddles with his foster parents for a little bit. Jais is a good eater, but oatmeal doesn’t make his stomach feel well. Jais has been living with his current foster family since he was two months old. Jais started walking at four years old and his foster mother is now trying to teach him how to ride a bike. He is now able to chew and swallow.