My Family Found Me

Boy, Age: 4
Region: Eastern Europe
Primary Diagnosis: Cerebral palsy, Global developmental delays, Hydrocephalus
Ataxic Cerebral Palsy; obstructive hydrocephalus; delays in mental development
$3,773.00
has been donated towards the cost of my adoption!
Inquire About This Child
2022 MACC, Available to Large Families, Available to Older Parents, Available to Single Fathers, Available to Single Mothers
Sizable Grants $2,500+
He runs, climbs stairs with help, rides a scooter, plays with cubes and figures which he can nest. Ned recognizes animals and knows their places when arranging a puzzle. He plays with other children, preferring the older ones and copying their actions. He loves music and musical toys, and sometimes dances. He responds to his name, follows directions, is well-intentioned, does not get angry and is not aggressive at all. Ned pronounces various sounds and syllables such as “ma-ma”, “ba-ba”(gandma), “ka-ka”(older sister), “hop”(ups), “meow”(what the cat says), “bau” (what the dog says), “da”(yes), “liu-liu”(swing), “ku -ku”(what the cuckoo says) etc. However, the main communication is related to taking the hand of a familiar adult and bringing her to the object the child wants. He arranges things in his room, chooses his clothes, can put on and take off his shoes, washes his hands by himself, likes to bathe by playing with balls and watering himself with a jug. He’s learning to feed himself independently with a spoon, but still needs pureed foods.

Ned lived in an orphanage for the first 2.5 years of his life. When he entered foster care, he could not sit, stand, make any sounds or have any form of communication. He has made a large amount of progress in just one year, with the help of multiple specialists and his foster family. 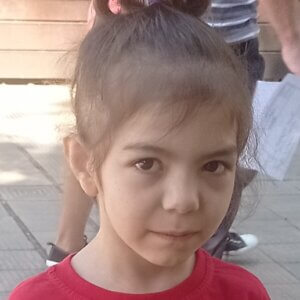 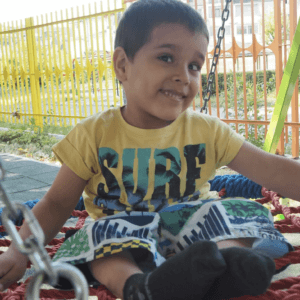