My Family Found Me

Girl, Age: 6
Region: Eastern Europe
Primary Diagnosis: Fetal Alcohol Syndrome, Global developmental delays
Syndromes of congenital anomalies mainly affecting facial appearance; mental delay, unspecified, significant disturbance of behavior requiring care or treatment; mild to moderate deficit; hyperactive behavior and underdeveloped speech;
Family history: the child’s birth parents abused alcohol, she has been raised in a neglectful environment
$1,025.20
has been donated towards the cost of my adoption!
Inquire About This Child
2022 MACC, Available to Large Families, Available to Older Parents, Available to Single Mothers
Medical report indicates that the birth mother is an alcoholic. While it does not state that the mother drank during pregnancy, prospective families should be prepared that Nahla may have FAS.

Nahla is physically healthy. She lived in a neglectful home for the first 4 years of her life, before being removed by social services and placed in foster care. She says individual words and some simple phrases. She has made progress in her development since being placed in foster care, but has had to work through behaviors and medical concerns as a result of the previous years of neglect. Progress is being observed in all aspects of her development.

Nahla’s behavior is characterized by impulsivity and curiosity. Her speech skills present with some deficits. She says the names and denominatives for people close to her – (grandma), (older sister), (uncle), etc. During interaction she uses mimics, gestures, points to what she wants and brings the foster parent to the respective object. She has started to express desires more often, ask questions or express an opinion with simple sentences or two or three words. She understands adults’ speech well and orientates in non-verbal means. She is gradually starting to adhere to personal boundaries and has started to be “shy” in unfamiliar places, as well as set boundaries in her communication with people outside her family circle. She enjoys riding a scooter and bicycle and playing with a ball and at the park. She is able to participate in some playing situations with the biological granddaughter of the foster family. The foster parents are helping her build her skills for independence, as well as self-service skills. The child is unable to eat independently or maintain personal hygiene habits, she is learning to tidy up her belongings and toys. She is able to announce her physiological needs. 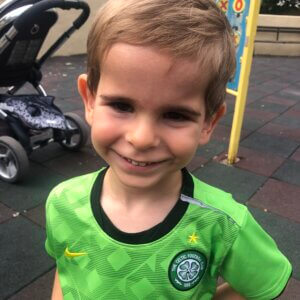