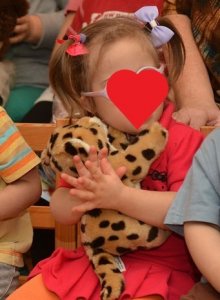 Kylie has brown eyes and brown hair. She attends a specialized preschool educational institution. She likes to play alone – to page through picture books, wash the tables with a moist duster, play with her dolls and reorganize toys. She is friendly and curious and likes to explore. In communication with other children she is friendly and open, has better contact with older children. he wants individual attention and looks for physical contact with adults. She likes to snuggle, hug and sit in your lap. She is also active and likes walks and shopping with adults. She has difficulties expressing her wishes because of a speech problem. She speaks unclearly and has a very small vocabulary but she understands instructions and assignments. She has emotional and behavioral disorders and doesn’t comply with rules. If she can’t get what she wants, she can cry and say out loud – no! She has difficulties respecting limits.

Kylie is not currently available for international adoption, she’s in a foster home.

$45.50 has been donated towards the cost of my adoption 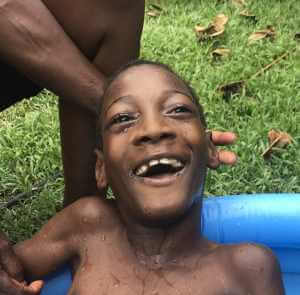 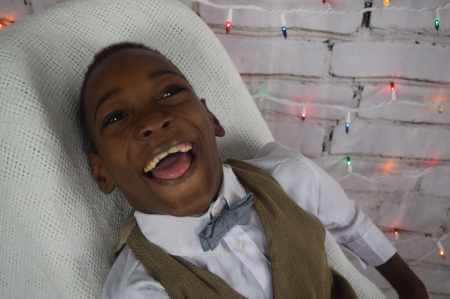 Jonah is a such joy to be around. His smile and laughter lights up the room, especially when he really gets going. He loves to cuddle, get kisses, and to be included on what is going on around him. He has some breathing issues and breathes very loudly but does not regularly use anything extra to help him breathe. Jonah has struggled with gaining weight his whole life and his weight gains and losses ebb and flow. In December of 2017 he had g-tube surgery and in December of 2018 he had a nissen to help prevent him from vomiting. Unfortunately the nissen failed and he can vomit again, but does so a lot less than he used to. He is unable to tolerate large amounts of food at a time so he is continuously fed with a feeding pump through his g-tube with a medical formula or blended food. Jonah has very high tone but is on medication to help with that as well as goes to therapy multiple times a week for stretching, massage, exercises, and time in the stander.

Jonah can hold his head up on his own, but isn’t steady and will often fall backwards or forwards. He can recover from this on his own but often needs encouragement and occasionally a little help. Jonah can roll from his front to his back or from a side to his back or his front, but cannot yet turn 360 degrees without help. He can also scoot around a little bit whether he is on his back or his stomach. On his stomach he can lift his head up to look around, but does not do so for long periods of time. Jonah needs help keeping his arms in position for supporting his upper body on his elbows. He cannot yet fully sit on his own, but will do most of the work when in a sitting position. Jonah can hold things in his hands, but only does so for short periods of time. He currently uses a special tomato chair for sitting as well as his wheelchair when needing to be mobile.

Jonah has been going to school for a couple of years and has been working on communicating and making more and more choices. He can use a yes/no board or make choices between two things by touching the item or card or by looking in the direction of what he wants. He is continually learning and is reading full sentences and doing elementary math problems. He understands everything and has a great memory. Sometimes in school he likes to play tricks and purposely choose the wrong thing. He usually uses a magnet board and magnetic letters to write words or solve math problems, but he is working on using a touch screen computer and a computer that uses eye gaze. The eye gaze has been tricky though because he is always moving his head.

Jonah needs a family who can advocate for his care and love him fiercely. He needs access to more doctors than he has available in the country he is in to address and test some of his needs that cannot be done here. He is an incredible kid and deserves (and desperately needs) more medical care than he can get in his country. Jonah has been through a lot medically already in his life and has some medical trauma. We would love to see him have the best care he can get so he can increase his quality of life and hopefully need to see doctors less often.

This spot is for the Anonymous Angels group to make their donations for matching grants. 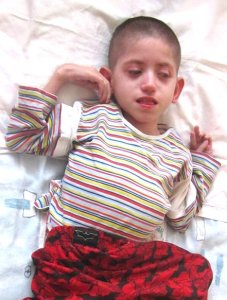 This is the face of institutional abuse and neglect in an Eastern European orphanage.  LouAnn needs a family to love her…provide for her medical needs and give her the life she deserves.

LouAnn has passed away 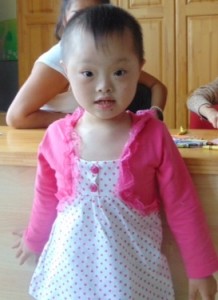 Sasha is critically ill, and no longer available for international adoption.  Please keep this sweet girl in your prayers. 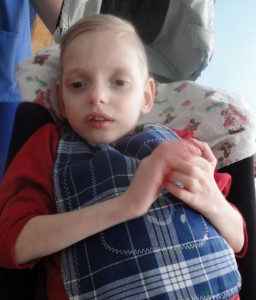 From an adoptive family in summer 2012:
We saw Denis three different times at large group events at this orphanage, and he is a very cute little boy. He is small for his age, and he was in a wheelchair the times I saw him (that may have been just for transport). But he was alert and following what was going on (a puppet show once, and a musical performance another time) with real interest.  He looked content and in a good mood every time we saw him.

This region typically waives the 10 day waiting period for children with special needs.

Update March 2014:
Denis is a very handsome little guy. He is nonverbal, but makes a high trilling/singing sound or squeals when he is happy or trying to communicate. He looks like he is about the size of a 4 year old, however his abdomen is quite large (barrel shaped) while his arms and legs and hands are very thin and tiny. He is in a wheelchair and does not walk. His little body shakes often, from his head to his toes, which may be seizure activity. He’s very alert and watches what goes on, but does not appear very interested in interacting with people specifically. He is in a room with many other older, more mobile boys, so he may simply feel overwhelmed with the activity and constant movement.