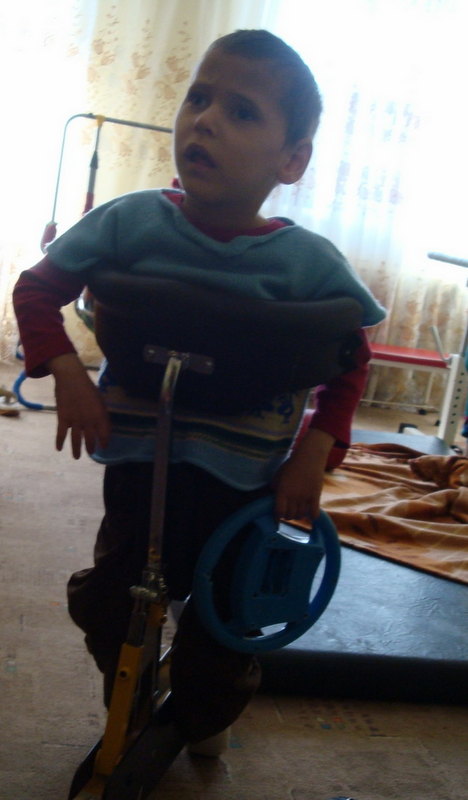 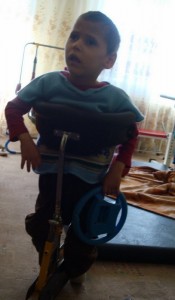 Not a great picture, but Liam is a cutie!   Even though he has CP, it’s nice to see him in a place that has him up and about.
Large families welcome, married couples only.
From a family who met him in 2014: This little guy tried for 5 minutes to get my attention before I could come over to him. Although he is mostly nonverbal, his receptive language is good, and he was able to follow instructions and respond to our conversation. I asked what he could do physically, and he immediately began pushing the cover back and trying to flip over, to show me he could roll, and pull up on the side of the bed. He is very sweet, and so very much wants OUT of the bed and to be up walking, but without proper medical intervention and regular therapy, he won’t be able to. His outgoing, sunny personality is absolutely wonderful! His biological mother died 4 years ago, and he entered the orphanage then, so he had that solid foundation of a loving mom during the important years. From a CP perspective- all four limbs are involved, and he has high tone in his torso that makes it difficult for him to sit up, because when he gets excited, his tone kicks in and it flattens him back out. He also has significant spasticity in his legs, particularly in his heel cords and hamstrings. That is something that in the USA might be treated with a medicine like Baclofen, which would allow him more flexibility. He’s very affectionate and easygoing, and constantly tries to get up and move around like the other kids. He just really needs a family to help him reach his potential!