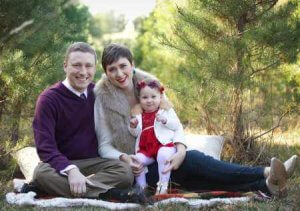 Samuel and Leslie Briscoe both hail from the great state of TN. They met while attending Tennessee Technological University, and they have now been married for six years. While dating, Sam expressed his desire to adopt a child due to his youngest sister being adopted from China. Through his own family’s experience, he had seen first hand the love and joy that comes through adoption, and he had always desired to give a child the same kind of love that his parents gave to his sister.

Four years after being married, the Briscoe’s were blessed with a beautiful biological daughter in August of 2017. Shortly thereafter, they felt impressed by God to start the adoption process for a child. They had not planned on adopting at this time, but the impression was so strong from God, that they knew there was a child waiting for them. They felt excited and nervous about the prospect of bringing a child into their family through adoption, but they could not deny that this is what the Lord wanted them to do.

At the time they began the process of adopting a child, they had not considered adopting a child with Down syndrome. On the second day of looking at referrals of waiting children, they were sent the file of a little boy with Down syndrome. Independently they both knew that the boy was their child. However, that did not make the decision easy. Even though there were times of uncertainty, the Lord gave them glimpses of the love that they would have for him as well as the joy that he would bring into their family. After several weeks of praying and fasting they accepted that all children are entitled to be reared by a father and a mother, and that he belonged in their family.

They are very excited to bring their little boy home, and they can’t wait to officially add him to their family. Their daughter loves to kiss pictures of the baby, and asks to watch his video. They would like to thank those who have taken the time to read their story, and they truly appreciate any and all assistance whether it is through prayer or financial support.

The Briscoe family has truly been humbled by this experience, but they know God will support and uplift them as they do his work.

Misty AXEL for the Marshall family — CO Scroll to top