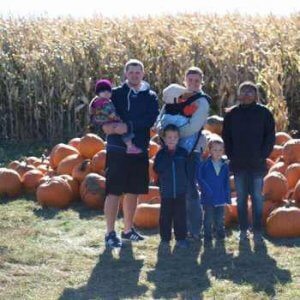 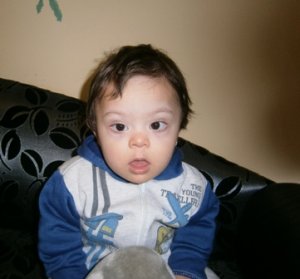 In 2010, Sam and Aaron met because two mutual friends found it strange that they both wanted “a lot of kids”. Their friends immediately introduced them. Within a few weeks, they were dating. Not long after, they had a serious talk about their future. Sam had grown up as a foster sister (her family had done foster care since she was 13). Her dream was to carry on that legacy. She wanted to foster and adopt. Aaron was fully supportive of this dream. Two short years later, they were married in July 2013!

They have carried out this dream already twice! They welcomed a son by birth, then adopted a 5-year-old boy, gave birth to a baby girl, adopted a 13-year-old girl, and then welcomed another boy through birth. Their kids are currently 14, 9, 5, 3, and 4 months. That makes 5 kids in 5 years!

Shortly after their second adoption, Sam found Reece’s Rainbow. She started researching and scouring websites full of waiting children all over the world. She read about “seeing the one” and “just knowing”. She asked Aaron many times about children she saw to see if maybe it was time to start an international adoption because they had simply found “the one”. She was heartbroken each and every time it was a “no”.

In December 2018, they welcomed another baby boy, Maverick, to the family. This put them at five kiddos in five years and they were sure they were done for a while. But then on January 25, 2019, just a month and a half after Maverick was born, Sam saw a picture of a little boy that made her heart skip a beat! She immediately started emailing his agency to find out more. She knew for certain that this was “the picture” she had been waiting to see! She approached Aaron with hesitation as they had just discussed waiting to add more kids to their family. He said “no” again, but this time she asked him to pray about it because she was certain he was their son. One month later, she asked again. This time, he asked questions about the boy, his country, and the process. Two weeks later, they submitted their first documents to adopt him! God sure does work in mysterious ways!! They welcome your prayers as they begin this long process to bring home Odegaard baby #6 in just 6 years.

They are so excited to meet their son but need help to get there! If you are able and feel called to do so, please pray for their journey and consider donating to help them get their son HOME.

The Odegaard family met their $5000 matching grant from RODS!