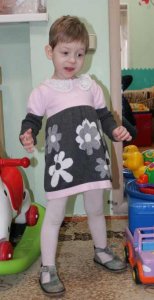 James and Kasey Perry have been married for 15 years and live in Kentucky with their eight children.

In the fall of 2016, they saw and fell in love with a beautiful little girl in Eastern Europe, and set out to adopt her as quickly as they could. Shortly before travel, the Perrys learned this particular little girl had become unavailable for adoption in her country. They were devastated, but knew this news did not come as a surprise to God, so they continued on in faith, believing the Lord to have another child in mind. He did, in fact, and in the summer of 2017, James and Kasey brought home their precious Daisy, who has filled their home with so much love and joy!

Never forgetting the first little girl that spoke to their hearts, the Perrys faithfully prayed they’d learn something of her availability. Nearly a year and a half later, the day had finally come! “Mila” was available again! Although they are sad she has remained an orphan during this time, they are grateful to be able to travel to Easterm Europe once again, for this beautiful girl they just can’t leave behind.

Your support means the world to James and Kasey as they begin again to adopt.