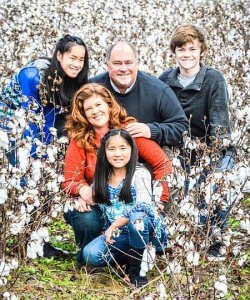 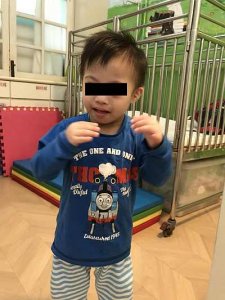 Larry and Angela met when Angela was still in high school and began dating several years later. Friendship blossomed into love and they married in 1993. Early on in their relationship they discussed their future plans for a family and decided that they would have at least one biological child but would also like to adopt at some point. They talked about the possibility of adopting a child with Down syndrome one day, since as a special education teacher Angela had always felt called to parent a child with special needs. Six years after getting married they had Holton, and for the next 9 years he was an only child. At that point, they realized that it was time to expand their family and they both agreed that it wasn’t important to them whether they brought any more children into the world, because there were plenty of kids who needed families and they would love them just as much whether or not they gave birth to them. In addition, they realized that there were many kids who were considered harder to place due to being older or having special needs. They wanted to provide a family for kids who may not otherwise have one. Their daughter Maili joined the family at the age of 4. She was born in China and was listed as having a congenital heart defect in addition to significant developmental delays due to hypoxia at birth. She brought a joy to their family that they had not even imagined possible, and two years later they returned to China to adopt another daughter. Callie was 6 years old at that time and only 8 months younger than Maili. She had a very rare heart condition but has thrived after having surgery. The girls quickly became inseparable and today these virtual twins are still the very best of friends. Now that the girls are almost teenagers, the Hornbuckles have decided that it is time to add to their joy once more by adopting a little boy with Down syndrome. The kids couldn’t be more excited about having a younger sibling to dote on, and Angela and Larry are ready to complete their family as they envisioned it almost 25 years ago. They feel particularly led to adopt a child with more significant medical and developmental disabilities who may have a harder time finding a family. In addition to Down Syndrome, Ethan has been diagnosed with a congenital heart defect (TOF) as well as tracheal and subglottic stenosis. He has a g tube and currently receives tube feedings.

Due to Ethan’s extensive medical needs, there will be increased medical expenses once he arrives home and they are trying to make sure that they are allowing for that in the monthly budget. Although they have the resources needed to raise this child, they do not yet have all of the resources they need to bring him home. Therefore they will have to rely on the understanding of grant selection committees and generous donors to help them come up with the final $7,000 or so they will need in order to bring this sweet boy home to his forever family in Georgia. The Hornbuckles believe that every child deserves a family regardless of their disability, and this little guy is no exception. They also believe that where God guides, He provides and they ask that you find it in your hearts to help Ethan come home to his forever family because they can’t wait to meet him!