Boy, Age: 11
Country Code: LA-4
Region: Latin America
Primary Diagnosis: Cerebral palsy
cerebral palsy and possible other delays
**** I am eligible for a $5000 Older Child Grant ****
Grant funds depend on available funding; the link above, shows the current available amount!
To inquire about this child, email childinquiry@reecesrainbow.org ***
Available to Single Mothers
Update Jan 2015: Quint is an adorable little guy. He appears to have cerebral palsy and possible other delays. He can sit up on his own and scoots all over the place. Quint can stand unassisted and has recently started walking on his own. He is very proud of this new skill and practices it often, although scooting is still his primary choice. Quint tends to grab at anything he is close to, whether this is a toy, grass or someone else’s clothing. He will hold on tight, and sometimes put the object he finds in his mouth. Quint currently has trouble making eye contact, but he still loves to interact and play. He is non-verbal, but can often be heard making loud noises as he plays, by himself or with others. These noises are sometimes an expression of frustration and sometimes indicate joy. Quint loves to be tickled and get kisses!

Update Feb 2018: Quint has become quite mobile and is very steady walking, sometimes even trying to run. He hasn’t figured out the pedals, but loves to scoot around on his tricycle. While he still puts everything in his mouth, he does know the difference between food and other things and will always take it back out if it’s not food. He is learning to feed himself and does pretty well with a fork and is getting better with a spoon. He also holds his own sippy cup. We have been working on using the toilet and he still urinated mostly in his diaper but has many bowel movements on the toilet. His problems with making eye contact have greatly improved and he has been able to make some strong connections and attachments. He loves to cuddle and hold hands. One thing he struggles with is sleeping through the night, which has gotten a little better since he started taking melatonin but he’s still a pretty early riser! 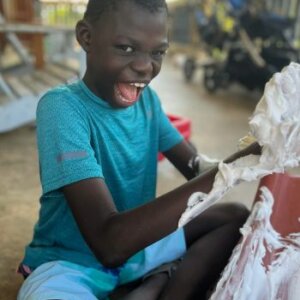