Boy, Age: 9
Country Code: LA-2
Region: Latin America
Primary Diagnosis: Down syndrome
Down syndrome, potential autism diagnosis
*** I am eligible for an additional $5,000 Grant from Reece’s Rainbow! Through 2022, children with Down syndrome ages 6-9 are eligible for a $5000 Older Child Grant! ***
$7,506.77
has been donated towards the cost of my adoption, including $1020.00 from MACC donations!
Inquire About This Child
2022 MACC, Available to Large Families, Available to Single Fathers, Available to Single Mothers
Sizable Grants $7,500+
Jais is generally healthy — it is reported he needs glasses. Jais is calm and loving towards those around him. He expresses his desires easily.  A specific agency has a $3,000 grant available for his adoption.

Update Feb 2020: This file is old, so the information is from one year ago. He is verbal. He attends speech therapy. He has some difficulty pronouncing some words. His speech is delayed according to his age. A year ago he was using diapers, but he was telling when he had to get it changed because he felt discomfort. He is very affectionate, very loving, and respectful with adults. He follows norms and rules. He was sometimes pulling the hair of peers at school. The neurologist states he is a child that has progressed a lot since he has been receiving therapies and recommended that he not stop them.

Agency staff met Jais in July 2022: Jais is a cute little guy who is described as calm and loving towards those around him. He expresses his desires easily. Jais is currently attending school and is in the second grade. It has been a process for him to adjust to being with other children. Jais likes music and he dances to the rhythm. He likes to be cuddled and touched, especially by his foster parents. In addition to having Down syndrome, Jais likely also has Autism. Due to his potential autism diagnosis, Jais has a hard time with transitions, changes, and strangers. He loves cars, especially being inside one! His foster parents take him for vacations, and he enjoys going to the beach. He loves being in the car so much, that he doesn’t even mind if he’s in there for hours…so road trips are a go! Jais can say the words, “mom,” “dad,” “water,” “ayyaya” and “hey.” Jais sleeps through the night, but has a special position that he feels most comfortable in. He likes to first fall asleep with his foster mother in her bed and then be taken to his bed. Jais wakes up at 5:30 a.m. and cuddles with his foster parents for a little bit. Jais is a good eater, but oatmeal doesn’t make his stomach feel well. Jais has been living with his current foster family since he was two months old. Jais started walking at four years old and his foster mother is now trying to teach him how to ride a bike. He is now able to chew and swallow. 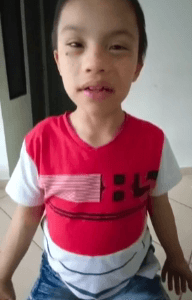