Boy, Age: 6
Region: Eastern Europe
Primary Diagnosis: Other Special Needs
CHIARI malformation; asthma- uses inhaler; delays in development
$10.00
has been donated towards the cost of my adoption!
Inquire About This Child
Available to Large Families, Available to Older Parents, Available to Single Fathers, Available to Single Mothers
Graden was born prematurely and experienced many complications after birth. He spent the first 5 months of his life in the hospital and has lived in one of the biggest orphanages in his birth country since leaving the hospital. He is often sick with respiratory infections and has an inhaler for asthma. He’s  been diagnosed with CHIARI malformation, but no treatment or surgery has been planned.

He can stand with support and will side step when holding on to something. He picks up toys, moves them from hand to hand and attempts to manipulate them. He interacts with staff members and other children. He reacts positively when he is given attention from adults and willingly interacts during therapy sessions and time with his teacher at the orphanage.

Update April 2021:
Graden was moved out of the orphanage and into a group home in December 2020. He’s made several developmental gains since being transferred. He now has the opportunity to attend a day program 3 days a week to receive specialized instruction and therapy. Medically, he no longer requires an inhaler.
Graden can walk when holding onto someone’s hands or an object (like a walker). He can walk up steps while holding on to the rail. He moves around independently by crawling. He eats from a spoon and drinks from an open cup. He enjoys pretzels for snack and does not have any issues with chewing. He likes to look at himself in the mirror and will dance while watching his reflection. He loves music. He explores and plays with toys. He can follow simple directions. He can mimic actions and learns basic tasks quickly when they are demonstrated for him. The staff at his new home believe he would make tremendous progress in a family.  Photos and videos from April 2021 are available for interested families.

Update on Graden August 2022: He’s WALKING!!! Graden continues to make huge gains in his development since being transferred to a group home. Physically, he’s now independently walking, feeding himself with a spoon and in the process of being toilet trained.

Developmentally, he demonstrates interest in the events happening around him, he understands verbal instructions, his vocabulary improves with every week that passes – he understands most of what is said to him. He is able to follow simple, 2-3 step gesture instructions. He persistently goes and takes toys and plays with them. He is emotional and sociable. He likes when a familiar adult speaks to him and independently seeks interactions. He reacts with a smile to tactile and verbal stimuli. He demonstrates interest in musical toys and toys that make sounds. Most of the time he is calm and happy. He seeks contacts with other children from the group. He reacts emotionally when told “no”. He is interested in different activities. He answers when called by his name and recognizes his reflection in a mirror. 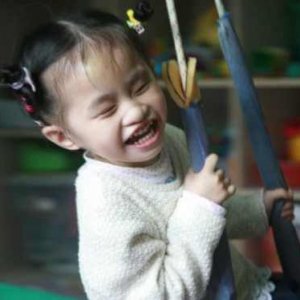 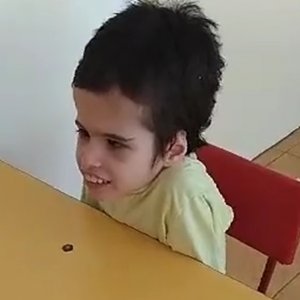