Boy, Age: 16
Country Code: EE-1: Adoptions are not currently being processed in this country. Further information can be given by an adoption agency.
Region: Eastern Europe
Primary Diagnosis: Hydrocephalus
Birth defect of central nervous system, hydrocephalus, mental delays, manifest deviation, cardipathy and protein-calorie deficiency
Available to Large Families, Available to Older Parents
Elijah needs a family asap, because he needs constant care, and at the orphanage he doesn’t receive it. They fed him with wheat cream only and how he is feeling sick all the time, it’s hard to feed him, so that at orphanages he just remains hungry sometimes.

He can walk and likes music and playing with mobile phones. He likes watching TV and doesn’t speak much.

Elijah really responds well to a male caregiver — he needs a Papa of his very own!
From a missionary who visited in August 2014: ” A beautiful little boy. He is doing so much better, he loves to walk. He needs someone to hold his hand as is too scared to walk alone just yet. He still has some self harming behaviors and lets you know when he’s not happy! But most of the time he is calm and has the cutest giggle. “

From someone who met him summer 2013:
Elijah is a beautiful, sweet child. He is nonverbal but he occasionally makes some noises. Unfortunately, when I saw him he had to be restrained most of the time because he would hit himself and bang his head … hard. He now has a one-on-one caregiver, and I hear he is doing very well. Elijah likes to watch tv, and he loves musical toys. When you play music for him, he just lights up in a huge smile. He has an infectious laugh. While I was visiting, Elijah had surgery to fix a malfunctioning shunt. I was able to visit him in the hospital. The dedication of the man who is now his personal caregiver was amazing. Elijah can walk with support, and he loves to be held and cuddled. This little blond-haired child looks like an angel, and he would bring nothing but joy to a family’s life. 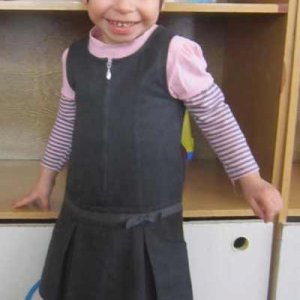