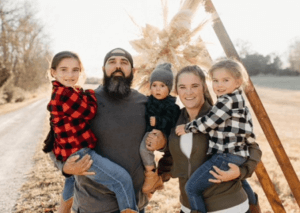 Alo! We are the Reyes family and here is our story of how we stepped foot on the road to adopting from North America’s Caribbean location.

Timothy and Lanie met in the 2012 when both were in enlisted in the United States Army. Tim and Lanie were stationed in Fort, Lewis WA serving in the 66th MP Co. During their time of service they would deploy and grow to become the best of friends for roughly two years. They decided to step out in faith that the friendship established would not be ruined and became husband and wife in November of 2014. Tim and Lanie welcomed our first biological child Peyton (female) in July of 2015. Once their time of service was completed they would make the 2 day drive from WA to their current residence in TN. During the drive Timothy and Lanie had nothing but time to reflect and discuss the future. The topic presented being adoption!

Growing up Lanie knew adoption was always something she wanted to do and surprisingly Timothy had the same outlook, it was a win! The couple decided they would pursue adoption once they owned their own home and had finished having their own biological children both took place between 2019 and 2021. During those years they were faced with medical trials that would test their faith but also be the guide to them wanting to adopt a special needs child. In 2019 at 4 wks old their middle child (female) Valor was diagnosed with LSG, a rare form of Epilepsy that is hard to control. For two years they would watch their tiny baby face life head on with the strongest medical team guiding her. They would spend countless weeks in the hospital as well as time in the Pediatric ICU . All to repeat it again in 2022 with their final child (male) Emmanuel at two months old. Due to Covid complications Emmanuel sadly was diagnosed with Sever Gastroparesis. He is currently fed through a G/J tube. Since the placement of his tube he has been thriving! When many families would have said no the medical needs they have are enough Timothy and Lanie instead felt an even stronger calling from God to adopt a child with special needs.

August 26th 2022 Lanie joined a FB group because the family wanted to start gathering info on adoption. This is when God would place an angel in their path but also the child they would begin pursuing. This individual went out on a limb asking Lanie to view Reece’s Rainbow and the children in the Caribbean location. During the moments of scrolling there was a child Lanie kept returning to, she could not stop looking at her profile. The more Lanie looked the louder she could heard God calling her towards this child. Lanie presented this child to Timothy as their special needs are more than their current two and told him, “something in me is saying she is the one, a momma knows!” Not even 72 hours later God began opening doors calling the couple to run! Timothy and Lanie had originally planned on starting in May 2023 but God opened a door calling them to start September 2022 and the couple walked through it placing all their faith in Him following His lead. He has guided them spiritually, emotionally and financially proving this is His child for the Reyes family all they need to do is follow Him!