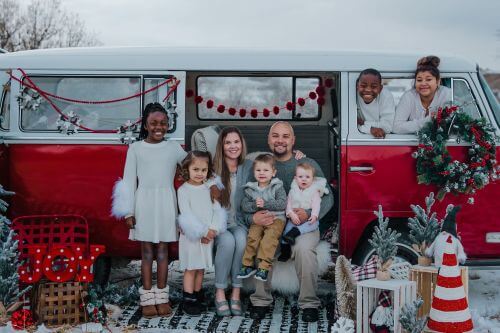 Hello, we are Tony and Sarah Witbrod. We have six amazing children and have always planned to have adoption as part of our story. We met in college in 1999 and were married in 2006. Shortly after we were married, we accepted our referral for our daughter in Guatemala.

It was a long but amazing journey which included us moving to Guatemala and living there for the last three months of her adoption to make sure she was healthy and safe. Start to finish, it took nearly 18 months until we were able to bring our daughter home. We realized how long an adoption could take, so we started our next adoption as one of the pilot families in the Congo just a couple years later. We were luckily to bring home two children who are now 11 and 10 years old and are doing amazing after such a rough start to life. However, we had four of our babies pass away and two who are still there in the DRC, never coming home. From that anguish, Sarah started Wren’s Song in 2010 to help provide care for orphans in the Congo that we are still active with today.

Sarah has been following Eastern European advocacy sites since 2017 when her father was put on life support and she wanted to make a difference for the children who were in similar difficult situations. It’s been weighing on her heart and we feel called by God to be moved to action. We know if God calls you to do something, that he will show you the way. We are so grateful for sites like Reece’s Rainbow and for all those who donate to help those adopt.

We added three more biological children to our family in the years after the Congo. We love our six children and all the amazing memories that come from our day to day life. We have many adventures and are blessed to be going back into the adoption journey to add another child to our family.