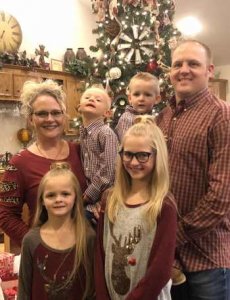 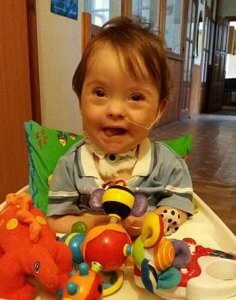 Bart and Heather are native Texans who never dreamed they’d have the family they’re blessed with today. Early on in their relationship they knew that this was “the real deal,” and when they began discussing marriage, the subject of adoption came up. It was important to Heather that she be open-and-honest about her medical issues which would make it almost impossible to conceive. Despite being his family’s namesake, Bart wasn’t at all concerned about not being able to have a biological child of his own and he was totally open to adopting. To their surprise, they found out they were expecting shortly after getting married and they delivered a beautiful baby girl on Heather’s birthday. It was a dream that neither of them thought would ever be a reality. Fast-forward to today….almost 13 years married, and not just one, but four beautiful children later, they thought their family was complete.

When their first son was born in 2015, he surprised them with a Down Syndrome diagnosis and a heart defect which required open heart surgery when he was six months old. Shortly after he was born, Heather stumbled upon Reece’s Rainbow and followed them on Facebook, seeing regular updates of all the beautiful children who needed homes. Although adoption had been a possibility early on in their relationship, that idea was never discussed again once they were able to have children of their own. That all changed when one special little boy flashed across Heather’s screen almost two years ago. She couldn’t get him out of her mind and after sharing his pictures and videos on social media hoping someone would fall in love like she did, she prayed for guidance because she wasn’t sure how else to help him. At that point, she couldn’t deny the intense feeling that they were supposed to be his family. She researched as much as she could about international adoption and presented the idea to Bart. He said he had a feeling it was coming from the first time she showed him the Reece’s Rainbow post. After praying on it, Bart was on board and they began the process of adopting “Levi.”

The biggest obstacle they faced was the cost. They had used up all of their savings when their son was born and needed open heart surgery and Heather had to be off of work for almost a year to stay home with him. They didn’t have enough time to save up enough to cover the entire cost of adopting because unfortunately, time wasn’t on their side when it comes to children in orphanages. Many children get transferred to adult institutions at a young age, and “Levi” also had medical issues that needed immediate attention, so they needed to move fast. Covid halted the process and most of their paperwork had to be redone because it expired due to the pandemic, but they’re finally close to meeting their son and will be bringing him home after the first of the year.