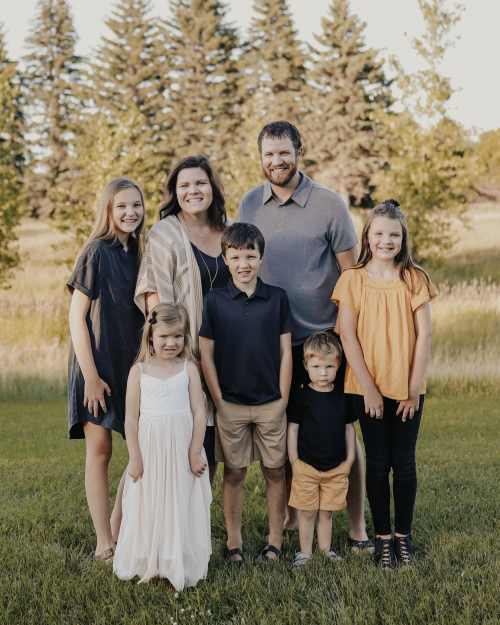 Meet the Effhauser Family! Matthew and Sarah live with their five children on a little farm in rural Minnesota along with their two dogs, two barn cats and too many chickens to count. They are high school sweethearts and started their family soon after being married; their children now range from 13 to 2.

A few years into marriage, their eyes were opened to children with special needs living in orphanages around the world. They began supporting families in process and donating to life-saving surgeries for little ones. Soon they realized that maybe they were being called to adoption, someday. The conversations and prayers around adoption began and as they added more children to their family, worked their way through job changes and renovated their 1913 farmhouse, they kept gently hearing the Lord say “not yet”, even when their hearts wished He would say yes.

Trusting in His timing and discerning that the time to adopt was hopefully nearing, Sarah resigned from her teaching position to stay home with their youngest children in preparation to be home with their adopted child someday as well. The Effhauser family participated in the Miracle of Adoption Christmas Campaign and were thrilled to share a sweet boy with the world and the work of Reece’s Rainbow. Maybe advocacy was only what they were called to do?

Over the years, the couple had shared many pictures of waiting children with one another until one summer day they saw the face of a young boy, just a few months younger than the baby of their family and they knew, now was the time! The entire family can’t wait for their little brother to be home!