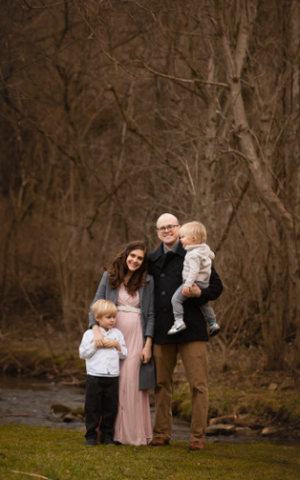 Jack and Emily are high school sweethearts who married in 2013. The couple always knew they would someday adopt. They separately volunteered at Russian orphanages in college and fell in love with the sweet children so in need of families there. Emily remembers holding the children with special needs, designated to a back room of the orphanage, and so in need of affection. Their experiences had a profound effect on both of them as they felt the separate call to someday adopt from this region… it was truly fate.

Jack served as an Infantry Officer in the US Army and the two have lived all over the country in their seven years of marriage. They have now settled into their civilian lives in West Virginia. Jack works in manufacturing and Emily, a former English teacher, now stays at home with their children and homeschools them.

Jack and Emily have two boys, Mark and Joseph, who are 5 and 2, as well as a daughter, Eloise, who was born earlier this year and lived for a short time after birth. Eloise had a rare genetic condition, and though she was too sick to live, she changed them in countless ways and continues to do so. Jack and Emily learned firsthand how every child, regardless of health or ability, is deserving of the same love and dignity as any other child. Eloise taught them that not only did they have the capacity to love and advocate for a child with significant medical needs, but that their hearts were open to the blessings of it.

Almost a decade after Jack and Emily volunteered at those Russian orphanages, it became clear that it was time; they were now being called to adopt a child with special needs from Eastern Europe. They hold to the truth that God’s ways are above our ways and they have seen the beauty of it in their lives in so many ways, most especially with this beautiful little girl with cerebral palsy who is waiting for them to bring her home. Jack and Emily and their boys are so excited to welcome this sweet child into their family and are counting down the days until she will be here.

They thank you for your support and prayers on this journey!