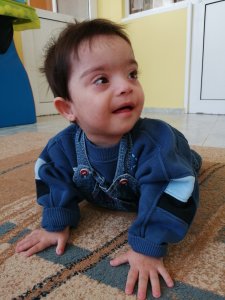 In February, we felt a tug on our hearts that we were being called to pursue adoption. We immediately began praying and trying to determine which route of adoption was best for our family. After looking at all the opportunities available, we felt that international adoption was the best fit for our family.

At first, we felt that we were being called to pursue a child in China. We started researching and found that we would not be able to start the process until December because of China’s requirements regarding the age of your youngest child. However, we still felt that China was where we were meant to go, so we spent time praying and learning about what the future would hold for our family. During this time, we felt very strongly that we were being called to pursue a child with Down syndrome. Children with Down syndrome in other parts of the world often face deplorable conditions and are institutionalized once they age out of the orphanage system.

At the end of May, Sarah received an email with a picture of a little boy who lives in Eastern Europe. We were immediately drawn to his big brown eyes and his sweet smile. We knew the decision to pursue him would totally turn our plan upside down, but we also had no doubt that he was meant to be our son. On June 4, we submitted our letter of commitment. On July 1, the foreign government approved our commitment application! Now, it’s time to work hard to get our sweet boy home! We have decided to name him Alek. “Alek” is part of his birth name, and we wanted him to have a connection to his heritage.

We do not personally know Alek yet. What we do know is this: He has never had a momma to snuggle with him the morning. He has never experienced having his daddy read him a bedtime story. He doesn’t know what it feels like to snuggle up next to his sisters during a family movie night. He doesn’t have a favorite blanket or stuffed animal that he takes with him everywhere he goes. He has never known the love of a family, and we cannot wait to share that with him!

$24.85 has been donated towards the cost of our adoption!