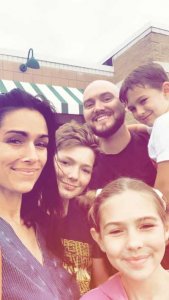 The Hamlet family had a baby girl named Saraiah in 2010 with Down syndrome and multiple heart defects. She was not given a long life expectancy. After hours of praying and talking to doctors, they were told their daughter did not have a chance at life and they should wait for her to pass away peacefully within a couple of days. Days turned into weeks and weeks turned into months. The doctors were amazed at her prognosis, and she continued to rally. They almost lost her a few times in the first year of life, but each time a miracle took place and she recovered. After age 3 doctors said she could live well into her 20’s or 30’s with how well she was doing. They had never seen a child with her condition live past a few days old without surgery. In 2018, at the age of 8 she passed away in her sleep. Shortly after, the H amlets felt that God impressed upon them to adopt a baby with Down syndrome. Veronica, had followed Reeces Rainbow for some time, eagerly praying for her husband to commit to adoption. After a silent prayer, Veronicas husband called, expressing his desire to adopt a child with DS. It was in this moment they both felt sure of the calling that God had placed on their life. They have sought the adoption of a baby girl from Eastern Europe with Down Syndrome. Their entire family (3 kids) are excited to bring their baby sister home. Please pray for them as they patiently wait to submit their dossier.