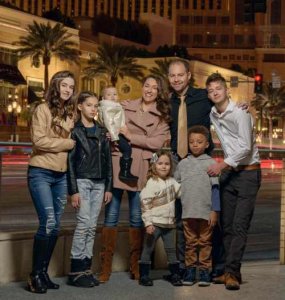 Tyler and Kylee Stef have been married for 11 years. Tyler serves as a fighter pilot in the Air Force and the family has been able to experience several areas of the country. Now their time in the Air Force is coming to an end and the Stefs will be putting down roots. Kylee has homeschooled five of their children, until a small Classical school opened up down the road from them, which four of the children now attend. Kylee is a stay at home mother, caring for the house and children.

When Tyler and Kylee were engaged, they talked about having a big family. “Wouldn’t it be great to have four kids?!” they would joke. After their fourth child was born, they thought their family was complete. However, it was after the tragic loss of their son that God started to plant the seeds of adoption. Their local pastor did a sermon on adoption as he and his wife adopted two children from the DRC. The Stefs felt a stirring and prayed about what God might have planned for them. Upon moving to a new location, the first family that Tyler and Kylee became friends with had a young daughter adopted from Thailand. Seeing this beautiful family brought adoption to life and they soon began their first adoption process.

The Stefs were made aware of waiting child lists and their hearts were drawn to these children. As they began the process of international adoption, they received a phone call from a local hospital that a baby had been born at 28 weeks and abandoned nearby. They needed a family to come hold him and asked if the Stefs would be interested. It was a crazy turn of events but God’s hand was clear as Tyler and Kylee officially adopted the premature infant three days later.

Four years later their hearts were drawn again to internationally waiting children and they began the process to adopt from China. This was just a month before China closed their doors to larger families. The Stefs were upset but spent more time in prayer to seek God’s direction. Months later they were made aware of the orphan hosting programs. Last summer they hosted two amazing sisters and during Christmas break they hosted a single boy, all from Ukraine. Tyler and Kylee learned about the great needs of orphans in Ukraine and felt called to adopt from Eastern Europe. One night, Kylee was praying for God to show her the child who would be theirs – Now Tyler, Kylee, and the rest of the kids are getting ready to welcome these special children into their family.