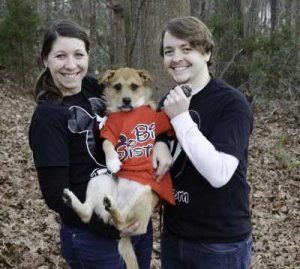 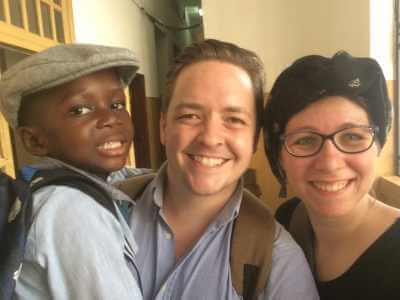 Melanie and Luke Dabbs have been best friends since their senior year of high school. The two met at a church they were both attending in 2010, and have been inseparable ever since! After courting for 7 years, they were married in Raleigh, NC in April, 2017. They now live in Raleigh with their corgi-terrier mix, Kona and their shepherd-lab mix, Zippy. They both love superheroes, Disney movies, cosplaying, traveling, and board games. Melanie is a teacher of the Deaf and hard of hearing, and teaches at a middle school. Luke is a mortgage specialist. Melanie and Luke love language, traveling, and different cultures.

In January, the Dabbs Family went to court and adopted a 7 year old boy named Sidikie from Sierra Leone, West Africa. Adoption was something they talked about before getting married, and they were both in agreement that they would adopt someday. However, with all of the country requirements, such as age and length of marriage just out of reach, they were prepared to have to wait to start their adoption journey for several years. That’s when a friend announced that she would be adopting from a small orphanage in Sierra Leone. After asking some questions, the Dabbs realized that they also met the country requirements for adopting from Sierra Leone! They looked at a picture of some of the children who also lived in that orphanage, and fell in love with a little boy named Sidikie.

Sidikie is an adorable little boy who loves Spider-Man, cars, and planes. As a toddler, Sidikie was badly burned when he fell into a cooking fire. As of right now, Sidikie’s burn wounds have healed, but he has not received the ongoing care he needs. As he has grown, his wrist and hands have become unusable as the scar tissue inhibits his growth and movement. Currently, he is virtually unable to use either of his hands due to the lack of medical care in his home country. He needs several surgeries to loosen scar tissue and allow his body to grow properly, as well as give him back some use of his hands. The Dabbs have encountered obstacle after obstacle during their adoption journey, from important government buildings in Sierra Leone burning down, to their attorney getting malaria and being out of work for over a month, to a global pandemic. When they started the adoption process, Sidikie had just turned 5. Now, he is almost 7. He has been waiting a very long time to be with his forever family, and has had to be so brave each time his family has to leave after a visit.

The Dabbs finally went to court to adopt their little boy in January, and are now just waiting on his visa so he can come HOME.