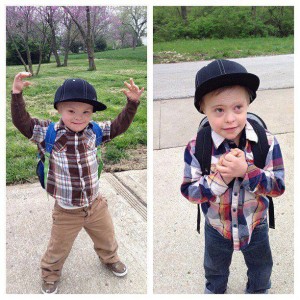 UKRAINE
On January 24th we finally arrived home with our three angels!  The flight from Ukraine was quite eventful.  Ethan (previously known as Dima) broke out in chicken pox a few days before we flew home so he was incredibly uncomfortable.  He also had pneumonia. We were quite shocked but thankful that he was cleared by the doctor to fly home. All our family was waiting at the airport for us with screams of joy, hugs, tears and lots of kisses.

The past two months have been truly amazing.  The boys are doing new thingsevery day and astounding their therapists.   Sasha (previously Sam), our 6 year old, had a hard time when he first arrived.    He would scratch us, bite us, pull our hair and scream at night.    Now Sasha is a completely different child.   He is at peace and doesn’t act out in a negative way at all. He loves all the love he is receiving and we love giving it to him.

Ethan (previously Dima), is 5 and has the body of a 1 year old. He is a completely different child as well.   We were told he would not be able to function mentally and physically beyond where he was at the time we met.   He was 11 pounds when he left the orphanage and is now 23 pounds.   He laughs and interacts with all of us with so much life! He was unable to even stand at the orphanage.   Now he is able to stand (leaning on something) for 20 minutes at a time.

Our 2 year old, Silas (previously Roman), is a joy bug. He keeps us laughing all the time. He was weak and had a terrible rash and nose infection when we brought him home.  Now he’s much healthier and stronger. He will have surgery in June to close the hole in his heart and we are thrilled with the good reports from his doctor!

We just returned from a weekend vacation celebrating the boys arrival.  We all spent 2 days the “Great Wolf Lodge,” here in Kansas City, where we all splashed at the indoor water park and celebrated our expanded family! The boys absolutely loved it and their sisters had so much fun swimming with them. The Lord has been so good and faithful to us, providing all we have needed along the way.  Thanks for your prayers and support! It is so good to be home!

Follow the family’s adoption journey on their blog at thelouxfamily1.blogspot.com

CHIA-LING for the Becks Family
Scroll to top