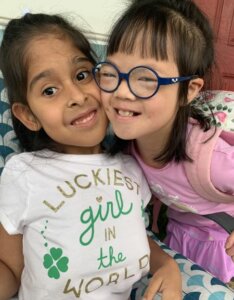 Corey and I have been married for 27 years. When I was in middle school, I had the desire placed in me that I wanted to adopt a child when I grew up. To unite with someone and become family was a novel idea for an adolescent. Corey and I dated for 5 years before getting married. Then had 5 biological children in ten years. Throughout that time I scrolled through state lists of children in need of a family; even calling and talking to the social worker and asking about the process. But nothing took root until our youngest was ten years old. I saw a listing of four waiting sisters, longing to be adopted together! I immediately called and was excited about the possibility of becoming their family. Until I was told that my size family wouldn’t qualify us. But did I want to view a file on a little girl from China with Down Syndrome?

Exactly 2 months after returning home from China, I saw a picture of my second daughter. A little girl from Bulgaria with Spina Bifida. Truth be told, I didn’t know the first thing about either special needs of my daughters. All I did know was we would be a family and we’d figure it out together. And we’re doing it again. Another little girl from Bulgaria. She’s four years old and we couldn’t be more excited. We thank each and every donor for helping make all of this possible!