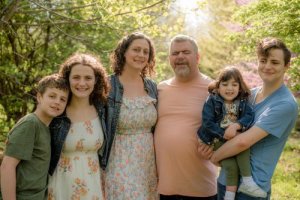 Phil and Kristie Graves have been married for almost 2 decades. Phil met Kristie when he became the youth pastor at Faith Baptist Church in Maryland in 2001. Kristie was teaching senior high Sunday school and Phil thought she was pretty nice from the very beginning.

For several years, Phil and Kristie discussed the idea of adoption. In 2017 they adopted their fourth child, Elliana, from Armenia. They have now taken the first real steps toward adopting their fifth child, a girl from Eastern Europe. They decided to adopt a special needs child through Reece’s Rainbow because they believe all kids deserve a loving home. She is a beautiful creation of God and they are anxious to get her home.

They also have three biological children. Won’t you please help them take their family from six people to seven? You can help by donating to their adoption. Thanks for your prayers and support!