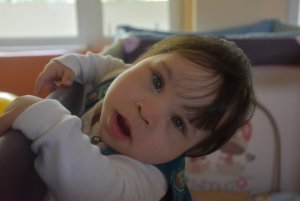 The Holthouse family consists of Daniel and Jean, Danny and Sammy. They live in Maryland where Daniel is a training specialist and Jean is a stay-at-home-mom. They are a close-knit family and enjoy spending time together. Before children Daniel and Jean enjoyed exploring, hiking, museums, and traveling, and they look forward to the season in their lives when they can do these things again with their children. Right now, they are in the toddler trenches, mainly enjoying playing with their kids at home or at the park or at Gigi’s Playhouse (non-profit learning and playing facility for people with Down syndrome). Danny had a hip problem that kept him from learning to walk on schedule, and at 6 years old he is getting so close to being able to walk on his own! He is a little engineer and loves figuring out how anything electronic or mechanical works. Quiet and gentle, his favorite activities are splashing in his water table, make-believe games with toy animals and food, teasing mom and dad, and reading books. Sammy at 4 years old is very active and loves to run and jump and climb. He is a big helper and loves following mom around, helping to switch the clothes from the washer to the dryer, helping take out the trash, and helping to sweep. His active little mind never stops coming up with creative new ways to play.

As a young couple Daniel and Jean hoped to start a family, but struggled with infertility and miscarriage. Jean would watch YouTube videos of “Gotcha” days in Chinese orphanages, with tears streaming down her face, wishing that Daniel and she could be one of those happy couples. When they looked into international adoption, it sounded financially impossible. Now, many years later, and through the help of grants, fundraisers and generous friends, they are one of those lucky couples! However, adoption has not been easy. There has been much to learn and much to heal for both their wonderful children. The repair of their broken hearts and spirits could not be done overnight and it is an ongoing journey. These two little people opened Daniel and Jean’s eyes to the urgent need that children in orphanages have, to have a family they belong to and who belong to them, and the tragedy of children abandoned at birth and institutionalized with no opportunity for bonding with a permanent loved one. The Holthouses own sorrow at infertility and loss has morphed into sincere thankfulness for the opportunity to love and be loved by some of the most incredibly resilient people on earth–their sons, Daniel and Samuel.

They always had a heart for international adoption, and signed up many years ago to receive emails with photolistings of orphans around the world with special needs who needed to be adopted. One day a picture and write-up appeared in Jean’s inbox of our oldest son, Danny. The Holthouses had recently completed a domestic home study and were waiting for a domestic infant match, but something about this little boy made them feel that they would do anything for him to be their son. He was so very sweet and vulnerable, unable to lift his little head from having had little opportunity to do so in his short 14 months on earth. And began a wonderful adventure of international adoption from Bulgaria. Two years after Danny came home, their second son, Sammy, joined the family from the same orphanage. This spunky little guy is the exact opposite of Danny in every way! Down syndrome is just one small thing they have in common.

The Holthouse family always wanted a girl, and when Cammy’s picture showed up on the photo listing, they raved about how cute and sweet she was. They didn’t think they were ready to adopt again, but a month later her picture showed up in their agency’s newsletter with a note that she still had not found a family. Daniel and Jean couldn’t believe that such a sweet adorable little girl was still waiting and immediately called up their agency and began the process of bringing home their first little girl! Since then, they have had the opportunity to meet Cammy on Skype multiple times and cannot believe their luck that they get to be parents to this spunky, smart, and beautiful little girl.

As a one-income family of children with lifelong disabilities, it is important for the Holthouse family to receive outside assistance with the cost of international adoption. We have been blessed to receive grants through Brittany’s Hope and Angels in Disguise for all of our adoptions, and to receive donations through generous help from family and friends and through small fundraisers. They are hoping to continue to raise funds the needed funds through Reece’s Rainbow.

Kary has received a $2000 grant from Reece’s Rainbow.