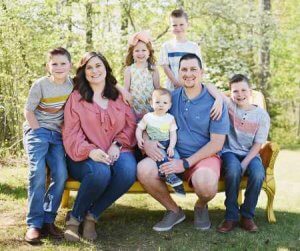 Christian was a beach bum from Florida, and Megan was a cowgirl from the mountains of South Carolina, yet they somehow found each other and have made a lifetime of memories. Christian is a paramedic and a soldier in the SC Army National Guard. Megan was a phlebotomist who gave it all up to be a stay at home mother and teacher. They have 5 biological children, ages 10 to 18 months, 4 boys and 1 little girl. Children have been the focal point of their marriage, and that love continues with a soon to be adoption. Their love for children has remained as strong as their love for each other.

Since before they were married, Megan had always had a heart for adoption. It has been a dream and desire of hers since she was a child. She specifically wanted to adopt a child with Down Syndrome, as they have both had experience with special needs and children with Down syndrome. Christian, however, was hard hearted and callused to the idea of adopting a child. He was content with having biological children and that was enough for him. Megan had prayed everyday for 10 years for a change of heart.

It was in the summer of 2018 that while listening to a sermon by a pastor about being adopted by his family, but also being “adopted” into the family of Christ. It was this time that Megan’s prayers were beginning to be answered. Christian’s heart was breaking down. He was beginning to see the ignorance and selfishness in his ways. He realized that if he could be adopted into the family of God, why could he not open his heart, mind, and soul to a child in need of adoption.

Their adoption journey has been a whirlwind, and has happened much faster than they ever could have imagined. It took 10 days for them to be approved for a domestic adoption with a domestic adoption agency. As they sifted through the children with special needs, there was never a child that they felt like God had placed before them. They knew the financial aspect of adoption was always a huge commitment, so they focused on staying domestic, with no sights set on an international adoption. It wasn’t until a childhood friend sent a link to an absolutely adorable baby girl to Megan, that an international adoption was on the table. This was it. This was the child that they had waited for their children had waited for, and furthermore the child that God had placed before them to bring to her forever home!

Both Megan and Christian are beyond elated with the thought of finding their baby girl and bringing her home. It has been a blessing each and every step of the way, but not only for them. On a side note, the little girl looks exactly like a couple of Megan’s family members, which confirms she was meant to be a Miller. They have included their 5 bio children in the adoption process, as well as, their two current foster children. The children have celebrated together, prayed together, enjoyed pictures, and stories of their soon to be sister! This family has been built on the foundation of love, and togetherness. The Miller family is beyond tight knit; they truly are a family who does everything together. They thank everyone for their support, for the donations, but most importantly their prayers. Without prayers, they completely believe that they would never be in a position to bring the sweetest little girl home to her forever family!

Saint Mary of Sorrows: Marshall Walk A CHILD for the Nymann family — Canada Scroll to top