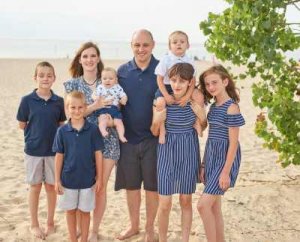 Michael and Jade met at work and soon fell in love. When they knew they were getting serious, Jade expressed to Michael her long time desire to adopt a special needs child internationally. Michael said that he would also love to adopt. After a very short engagement, they eloped in Hawaii on the Island of Kauai. When they climbed the cliff at Keoneoloa bay to take some wedding photographs, Jade looked up at the moon and remarked to Michael and their photographer that she felt they had a daughter near, but also felt that she was very far away. She brushed the feeling out of her mind for the time being but thought of it from time to time.

When they returned home to their now blended family of 5 children, they discussed if they wanted to have a child biologically. They decided they would try and were blessed to become pregnant very quickly. Unfortunately when Jade was several weeks pregnant, they found that their little baby had passed away. They opted to have testing done and found that their baby had some chromosomal issues. A few weeks later, they decided to go ahead and try again and were blessed to become pregnant with their son, Corbin Anthony, who was born several weeks early. They moved when Corbin was 2 weeks old into a larger home to accommodate their growing family. Jade would often look through waiting child profiles on Reece’s Rainbow. In August of 2019, she happened to look through waiting little girls with Down Syndrome. She came across Perla’s photo and something jumped out at her and said “This one.” Jade saw that her birthday was in 2017 and thought that adopting out of birth order would be too hard, so she ignored her intuition. Through this time, Jade advocated for Perla, asking friends to consider opening their homes and hearts to adoption. She prayed a lot, and thought that they may pursue another waiting child, but her and Michael never felt completely peaceful about it.

One day Jade had received a message from a woman that she did not know asking her if she would like to adopt Perla. Jade told her that she would love to, but was not sure about the logistics of an out of birth order adoption. Jade was able to get the information she needed and asked Michael what he thought. He said he would love to adopt Perla, and once they came to that decision, they both felt peace beyond understanding. Also,  Perla was born in the month that they got married, so they took it as a sign that she was the daughter Jade felt was near. Michael and Jade are aware that things are not always guaranteed in adoption, and have decided that if for some reason they are unable to continue to pursue the adoption of Perla, they will choose to adopt another child with Down Syndrome in that country. They are excited to bring their new daughter home, and their children are anxiously awaiting the arrival of their baby (and big) sister.