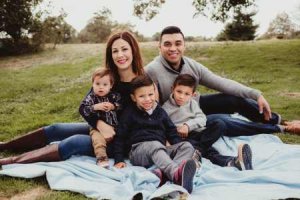 Meet the Romero Family! Omar and Trisha met in 2008 and began dating that Fall. Together they enjoyed running/exercising, traveling, dancing and doing local wine tastings. In 2012, they got married, and were blessed to quickly start a family. They live in the Midwest with their 3 biological sons – Mateo (6), Luca (4) and Cruz (1). They also have 3 small dogs (Italian Greyhounds).

During Cruz’s pregnancy, they did a blood test to find out his gender but ended up finding out a lot more. They found out that he was very likely to have Down syndrome. The news was very tough and quite devastating initially since they didn’t know anything about Down syndrome and what that would mean for their son. After allowing themselves to cry and mourn the loss of the child they had thought they were having, they wiped away their tears and committed to be the best parents that they could be to their son. They spent the rest of the pregnancy learning about Down syndrome, making connections with other families that had children with Down syndrome and preparing for his arrival. The moment that Cruz was born was unforgettable to them and they realized that he was exactly what they needed the whole time. Cruz is cherished very much by the whole family and has taught everyone so much already about acceptance and faith!

After having Cruz, Omar and Trisha learned that many children like him end up without a family just because they have Down syndrome. They began discussing the idea of international adoption, looking at some of the children that were waiting, and knew that someday when the time was right that they would bring home a child with Down syndrome and provide them with a family, a home and most importantly LOVE!

In mid-November, Trisha came across a beautiful baby girl in Eastern Europe and without hesitation knew she was meant for their family. The Romeros are thrilled to be on this journey to bring home a daughter that will be loved and cherished by all! They know the international adoption road is long and costly and they would be so appreciative and grateful for any support!