Boy, Age: 14
Country Code: Asia.1: This country is currently not actively processing adoptions, due to COVID.
Region: Asia
Primary Diagnosis: Limb differences
Limb differences-hands and feet deformity
**** I am eligible for a $5000 Older Child Grant ****
Grant funds depend on available funding; the link above, shows the current available amount!
To inquire about this child, email childinquiry@reecesrainbow.org ***
Available to Single Mothers
Warner is diagnosed with deformity of hands and feet. He has one toe on each foot and one finger on each hand, but he does not let that stop him from doing anything…he’s one amazing and resilient kid!

Warner’s file is outdated, so his current agency is trying to get an update. From his Oct. 2011 file: Warner has good common sense and can sing songs he sees on TV. He takes his quilt and goes to bed when the caretaker tells him to. He can play and eat with his hand holding the toy or bottle just like any other child, even if the toy is small. His intelligence and language development are normal. Warner likes imitating the grown-ups’ behaviors and he is curious about everything. Warner is described as a lovely character and as optimistic. He is an intelligent child who has great ability to learn new things and he is happy to play with others. His favorite thing to do was play in the ball pit. Look at all the things Warner can do! He is not going to let anything get in his way or stop him. Will you be the lucky family who makes Warner your son? 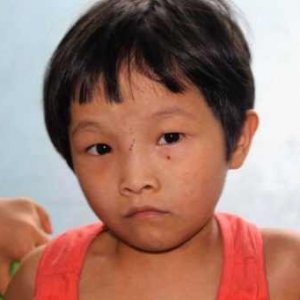