Boy, Age: 14
Country Code: Asia.1
Region: Asia
Primary Diagnosis: Down syndrome
*** I am eligible for a $15,000 Older Child Grant! For more information or to inquire about this child, please email childinquiry@reecesrainbow.org ***
Available to Single Mothers
Because Teagan has Down syndrome, his physical development, intelligence and mental development developed slowly and was delayed compared to kids of similar age obviously, especially motion and flexibility of his limbs were slightly poorer. In recent years, with the efforts of this institute and foster parents, he can stand by holding onto objects, walk slowly. Now according to his growth foster parents offered him speech rehabilitative and limb training every day.

Teagan is shy, has a ready smile, likes to listen to music very much. When music plays all of his attention is attracted. When being glad he will swing his body following the musical rhythms. He likes to play toys very much, in particular toy cars are his favorite toys. We hope that he who is shy could become more and more active.

UPDATE 2013:
Teagan can sit, can understand simple language. His life is regular, has 3 meals per day, has dinners and goes to bed on time. Every day he tells stories, plays games and has outdoor activity under the guide of the foster parents.

Full social history and medical records available. Single moms permitted, only one parent has to travel. 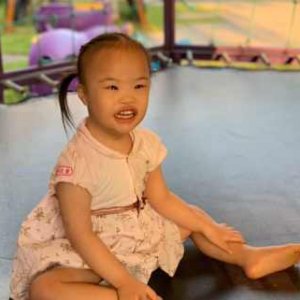