Boy, Age: 12
Country Code: Asia.1: This country is currently not actively processing adoptions, due to COVID.
Region: Asia
Primary Diagnosis: Spina bifida
meningocele (post-op), hydrocephalus (shunt placed)
**** I am eligible for a $5000 Older Child Grant ****
Grant funds depend on available funding; the link above, shows the current available amount!
To inquire about this child, email childinquiry@reecesrainbow.org ***
Available to Single Mothers
Ryan is a sweet, shy little boy. He was abandoned outside a hospital when he was about 12 months old. Shortly after coming into orphanage care, he had surgery for a meningocele and also had a shunt placed to decrease the pressure in his head caused by hydrocephalus. The procedures were successful and he has recovered well. Ryan has good bowel and bladder control and his latest medical report says he’s healthy now.

We visited Ryan in his orphanage in late June and were taken in by his shy smile. He enjoyed playing with our iPad. Ryan demonstrated his excellent walking and running, and sang us a song. His video will melt your heart.

Ryan lives with a foster family. He sleeps with his foster mother and is very attached to her. Ryan is described as introverted and not very talkative. His motor and speech development are a bit delayed.

Could Ryan be the son you’ve been searching for? 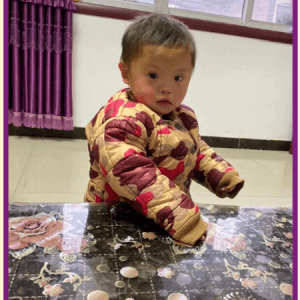