Girl, Age: 9
Region: Eastern Europe
Primary Diagnosis: Cerebral palsy, Other Special Needs
infantile cerebral palsy, left-sided hemi paresis; Congenital anomaly of the nose and ear; cognitive delays
Available to Large Families, Available to Older Parents, Available to Single Mothers
Nora lived with her birth family until she was 3 years old. She was removed due to neglect and placed with a foster family. She lived there for 2 years. The foster family did not want to raise a child with disabilities, so Nora was moved into a group home. Nora likes listening to children’s songs and singing, watching TV, cartoons, playing with a ball and with dolls. During the summer, she loves playing on the swing. Nora walks independently while swinging her left leg.

Her fine motor skills are underdeveloped; she has not formed skills for writing. She has a poor grip in the left hand. She recognizes parts of her body – hands, nose, ears. She recognizes her reflection in a mirror. She interacts appropriately with both children and staff in the group home. She enjoys talking and speaks freely in conversation with the other children. She follows directions and can answer questions, though she often just smiles when asked a question (which may be because she doesn’t understand the question or doesn’t know the answer).

Photos and videos from March 2022 are available through the agency. 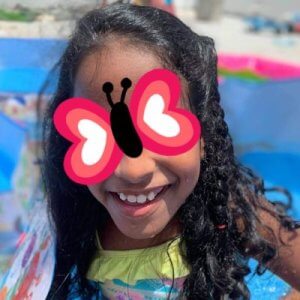