Boy, Age: 15
Country Code: Asia.1: This country is currently not actively processing adoptions, due to COVID.
Region: Asia
Primary Diagnosis: Other Special Needs
Brain damage
**** I am eligible for a $5000 Older Child Grant ****
Grant funds depend on available funding; the link above, shows the current available amount!
To inquire about this child, email childinquiry@reecesrainbow.org ***
Available to Single Mothers
Nelton underwent a comprehensive assessment and joined a special education program inside the institute. We have a specialized teacher that plans specific content for him to learn every day. Since he began the special education class, Nelton has greatly improved. He is very interested in learning mathematics, art, and music. Everything that he studies, he is able to really know. Now, Nelton has learned how to count from 1 – 20 and he can write Arabic numerals from 1 – 10. He has even learned how to sing children’s songs, dance, and draw. His passion is drawing. One time when he went to class with good behavior, the teacher rewarded him with a watercolor brush. After he returned to his room, he first showed it off to everyone, and then he started to paint on the wall a house, sun, clouds, grass, kittens…After a while, when he was finished with his “great composition,” even though he drew on the wall, we had no choice but to say Nelton’s painting is truly very good, and therefore the nannies still praise him. He is the “Little Artist” of the Children’s Department, but he never brags about it. He usually takes the initiative to teach the other children.

Nelton’s comprehension abilities, language organization abilities, and expression abilities are all very good. He is capable of understanding adults, and is even able to fluidly express his own opinions, and at times, he runs into differing opinions with the nannies. He will “argue strongly on just grounds” and he can even persuade the nannies. He also understands politeness. When he sees someone he will take the initiative to greet them, and when he sees someone off, he will say “good-bye.” 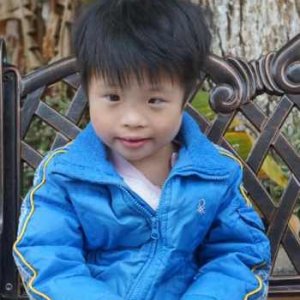