Girl, Age: 7
Country Code: Asia.1: This country is currently not actively processing adoptions, due to COVID.
Region: Asia
Primary Diagnosis: Down syndrome
Down syndrome, anal atresia, post-operative of sigmoidostomy
*** I am eligible for an additional $5,000 Grant from Reece’s Rainbow! Through 2023, children with Down syndrome ages 6-9 are eligible for a $5000 Older Child Grant! ***
$2,459.00
has been donated towards the cost of my adoption!
Inquire About This Child
Available to Single Mothers
Sweet little Naomi is described by her caregivers as cute and full of energy! At the time her file was prepared, she was crawling everywhere and pulling to stand. Whenever her nannies called her name, she would crawl quickly to them and hold her arms out to be picked up. Naomi loves being held, playing with toys, and playing with her little friends. She is fond of music and will rock her body to the rhythm. She is not shy around strangers and has a ready smile. Naomi entered the care of the orphanage at just two days old. Soon after, she was sent for surgery due to anal atresia. A sigmoid colostomy was done at that time. When Naomi was five months old, it was confirmed that she had a congenital heart defect (minor PFO). Naomi is a precious little girl and we are hoping to get an update on her to see how she is doing now!

Update January 2021:  Naomi is generally healthy.  She is doing great with potty training, with adult reminders.  She has strong a character and likes to be praised; she is well behaved and obedient.  She has good gross and fine motor skills! She has received pre-school education at the orphanage. Naomi has been living in a foster family at the orphanage. She is attached to her foster mother. She cares for others and reaches her hands to touch your face.  She gets along with other kids and adults. She likes to play with other kids.  Naomi isn’t speaking yet, but she follows directions and dresses herself. She is not picky about food and she will eat everything.  Naomi enjoys playing outside! 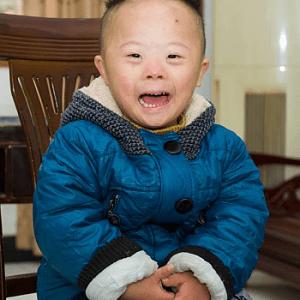