Boy, Age: 14
Region: Eastern Europe
Primary Diagnosis: Other Special Needs
B-cell Acute lymphocytic leukemia (ALL). Relapse. Status after chemotherapy. Status after Radiation therapy – prophylactic Radiation therapy of Central nervous system (CNS)
**** I am eligible for a $5000 Older Child Grant ****
Grant funds depend on available funding; the link above, shows the current available amount!
To inquire about this child, email childinquiry@reecesrainbow.org ***
Available to Large Families, Available to Older Parents, Available to Single Mothers
He got very sick in 2015 and went through a number of procedures and while being in a hospital, his mother abandoned him. He is now cured although they keep monitoring him but he desperately needs a family to love and support him and to give back his faith into the family.

Musa is well-mannered and well-meaning child. Follows the daily regime in the CFTA and every day marks progress. His vocabulary is still not very rich because he did not even know Bulgarian until two years ago. He still has some difficulties in choosing the right words. Musa constantly enriches his vocabulary and progresses in this area. His fine motor skills are very well developed, but he still has some difficulties with writing. He is learning to read and already recognizes the individual letters. Musa knows the geometric figures. Now he is able to solve simple tasks with addition and subtraction tasks. Due to the history of his placement and neglect, the child still has difficulties at school and his performance level is lower than this of his peers. But he is willing to learn and does his best.

Musa is quite shy, passive, silent and closed. He has difficulties in communication with strangers and difficult to trust. Musa does not like to be left alone and he is afraid of that. If things do not happen in the way he wanted, it is possible to close in himself. After spending some time in reasoning on what has happened, he realizes that closing in himself, may not be the best way to deal with problems.

In relationship with his peers, Musa is a leader. He has a fighting spirit and likes to win in the games. In his relationship with adults Musa shows respect for their authority. Obeys and seeks for their approval. This has largely contributed to the great progress the child has been making in the past two years.

In his spare time, Musa likes to play soccer. He also plays basketball. He also likes to color and to play on a tablet. His favorite color is blue. Favorite food sausages, dessert – ice-cream and fruit – banana. His favorite footballer is Ronaldo and dreams of becoming a soccer player when he grows up. From the animals he mostly likes dogs.

Musa has difficulties in talking for the adoption, but in general his attitude is positive. 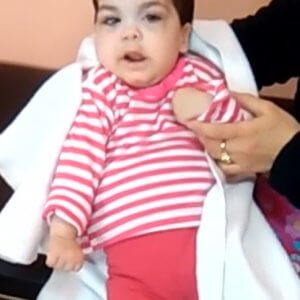 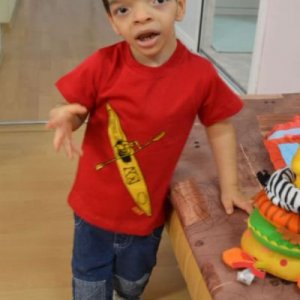