Boy, Age: 14
Country Code: Asia.2
Region: Asia
Primary Diagnosis: Congenital Heart Defect
Moderate Intellectual Deficiency and Congenital Cardio Disease
**** I am eligible for a $5000 Older Child Grant ****
Grant funds depend on available funding; the link above, shows the current available amount!
To inquire about this child, email childinquiry@reecesrainbow.org ***
From the time that Merlin was born until January 2008, he was hospitalized due to his poor health condition at birth. From January 2008 to January 2010, Merlin lived with his birth mother, who was his primary caregiver. He presently resides in an orphanage.

Merlin was born at 35 weeks gestation. After birth, he was diagnosed with ventricular and atrial septal defect and patent ductus arteriosus (large). He received several operations. At the age of 2 years, Merlin received frenulum incision due to his speech development delay. He has since been evaluated for speech, cognitive, and motor development. He began receiving therapy for his delays and was evaluated as having moderate intellectual deficiency. He continues to receive therapy while residing in the orphanage. Physically, Merlin has a wide nasal bridge, eyelids slanting downwards, big thumbs, wide gaps between his fingers, and conditions of short attention, motion disharmony, and blurred pronunciation. 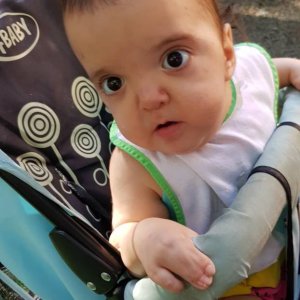