Girl, Age: 7
Country Code: Asia.1
Region: Asia
Primary Diagnosis: Hydrocephalus, Spina bifida
Spina Bifida, Hydrocephalus
$18.00
has been donated towards the cost of my adoption!
Inquire About This Child
Available to Single Mothers
Magnolia is a precious little girl, who is described as being extroverted and sweet tempered. She is fairly active, talkative, and has quick reaction time. Magnolia enjoys singing and listening to music. She gets along well with others and likes playing outdoors with her friends and with toy cars. Magnolia lives with a foster family and though she likes to be cuddled by her foster grandfather, she is closest with her foster grandmother. She is a good sleeper and sleeps in her own bed. She is not a picky eater, though she has been spoiled by her foster grandparents who tend to hand-feed her and let her use a bottle to drink her drinks from. Magnolia’s favorite foods are meat, dumplings, noodles, vegetables, and fruits. Magnolia can walk independently. She was able to imitate words and say simple things like, “What is this?” Her intelligence was said to be delayed compared to her peers, but her orphanage also seems to say this about many children in their care.

In January of 2014, Magnolia received surgery for lumbar spinal meningocele and hydrocephalus. She had good recovery after the surgery, though she is not toilet trained. We are unsure if that is a result of her meningocele surgery or because she just hadn’t been trained yet, but a family should be prepared for her to be incontinent. An update from August (you can read the full update below) mentions that Magnolia has had a handful of seizures over the years. Magnolia has the sweetest little face with the cutest little voice.

Magnolia has a $2,500 agency grant for her adoption with a specific adoption agency. You have to watch her sweet videos! The agency has several. 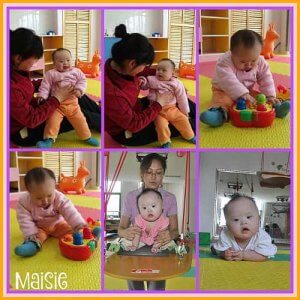