Girl, Age: 5
Country Code: Asia.1
Region: Asia
Primary Diagnosis: Down syndrome
$49.00
has been donated towards the cost of my adoption!
Inquire About This Child
Available to Single Mothers
Leigha is a sweet little girl. In July of 2015, when she arrived to her current care center, she could sit alone and was said to be smiley, but also cried a lot. At the time her file was prepared in 2017, she could stand up by holding onto something. Leigha liked to scoot across the floor on her bottom to get a toy she wanted to play with. She likes playing with colorful toys, dolls, and with other children. When she listens to music, she will shake her body to dance. When she was called by her caretaker, she could turn her head to find the sound source. Leigha smiles when people amuse her and she can understand her caretaker. She has a good personality overall, but is sometimes obstinate. Leigha is introverted, shy, and cries easily, but is as cute as can be. She has a good diet and is said to be a steady sleeper. We’re hoping to be able to get an update for Leigha and that she won’t wait much longer!

Leigha has a $2000 grant with her current adoption agency. 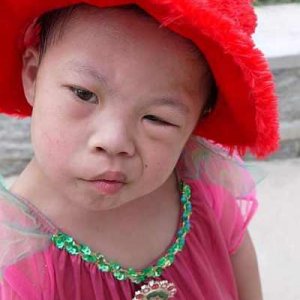