Boy, Age: 14
Region: Eastern Europe
Primary Diagnosis: Cerebral palsy
Infantile cerebral palsy – quadric paresis; Severe to deep mental delay; Delay in the neuro-psychological development
**** I am eligible for a $5000 Older Child Grant ****
Grant funds depend on available funding; the link above, shows the current available amount!
To inquire about this child, email childinquiry@reecesrainbow.org ***
Available to Large Families, Available to Older Parents, Available to Single Mothers
Kessler lived with his birth parents until he was almost 3-years-old when he was placed in an orphanage. He currently resides in a group home.

Kessler can turn from his back to his belly and vice versa. He crawls using his hands and can sit when held by his hands. He can sit with support for a longer period of time. He can reach out and grab a toy. When purposefully looking, he can coordinate the movement of his arms – he can thread rings on a stable axis with help from an adult. His notions and perceptions are not full. He is not oriented in a social environment. His concentration and attention are weak. Sometimes he looks at objects and can follow them. His involuntary attention is better than his active attention as it is hard to attract and to hold. His memory is with reduced volume and short-termed.

Most of the times, Kessler is happy. He seeks approval, attention and love from adults, attention and love. His reactions to positive emotional stimuli are adequate. He is apt to change his mood depending on the circumstances. He is attached to the staff. Kessler makes undetermined and happy sounds that are the result of other people talking to him. He is communicative and curious. When he is awake, he spends his time among the other children and interacts with them. He perceives their sounds, touch and reacts by moving his hands, turning his head, making sounds and laughing. He understands poor behavior and will stop unwanted actions.

Kessler can manipulate objects. He plays with rubber toys, rattles and likes to move a ball in a labyrinth. He holds the toy for a short period of time and bites it. He can look at a toy for longer period if the toy lights up. His sleep is calm. He is dependent on the staff for his basic needs. He is fed by the staff. 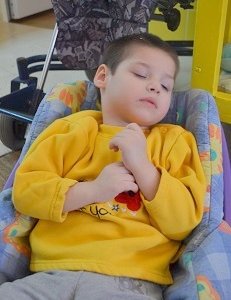 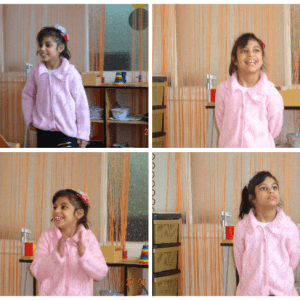