Girl, Age: 14
Country Code: Asia.1: This country is currently not actively processing adoptions, due to COVID.
Region: Asia
Primary Diagnosis: Congenital Heart Defect
Grace has been diagnosed with Postoperative ASD (CHD). Grace has recovered well after her operation from 2010.
**** I am eligible for a $5000 Older Child Grant ****
Grant funds depend on available funding; the link above, shows the current available amount!
To inquire about this child, email childinquiry@reecesrainbow.org ***
Available to Single Mothers
Grace is outgoing, smiles often, and likes playing with other children. She is a beautiful girl and is curious about the outside world. When intrigued by new objects, she will carefully observe and explore them. She likes meeting new people, and gets along with other children her age. She is a very active 5 year old. She can run and jump, can feed herself and use the restroom by herself. She can take on and off her clothing independently. She understands the meaning of “no”, can call “father”, “mother”. She can say “one, two” “give” “want” “fetch.” She enjoys listening to music and singing loudly. Even though nobody can understand what she is singing and yelling, she is very happy and involved in it. Even though she does not like speaking, she is very smart and observant. Grace likes to help the aunt to do some housework, such as folding the quilts and picking up toys. When the caretakers are holding the young children and they drop their toys, Grace will take the initiative to retrieve the toys. When the aunts want to feed the babies, Grace will take the initiative to bring them a towel. Her favorite fruits are bananas and small tomatoes. She also likes desserts.
Gigi 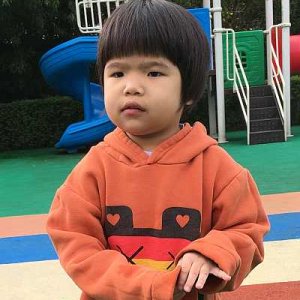