Boy, Age: 8
Country Code: Asia.1: This country is currently not actively processing adoptions, due to COVID.
Region: Asia
Primary Diagnosis: Down syndrome
Down syndrome, congenital heart defect
*** I am eligible for an additional $5,000 Grant from Reece’s Rainbow! Through 2023, children with Down syndrome ages 6-9 are eligible for a $5000 Older Child Grant! ***
$27.50
has been donated towards the cost of my adoption!
Inquire About This Child
Available to Single Mothers
Dobie is a delightful little boy with a love for music and dancing. In April of 2016, Dobie was moved from his orphanage to a foster family. Dobie can say dad and mum and can turn his head when called. When strangers try to hold him, he goes to his foster parents and shakes his head, refusing to let them hold him. He can wave goodbye, clap his hands, and copy his foster mother’s dance moves, putting his hands up in the air and shaking his body to the beat. Dobie can stand up from a sitting position and walk short distances. He makes a lot of sounds and loves to babble. He seems to be very on target developmentally in comparison to other children with down syndrome his age.

Dobie enjoys playing with his older foster brother and playing outside. If his foster brother is being bossy, he will hit him with a toy and sometimes bite him- he certainly knows how to stand up for himself! Dobie loves it when his foster mom holds his hand and his foster mother says he is a smart and flexible little boy. He will take the bottle when someone fills it up to drink on his own. He likes to eat apples and jelly the most. Dobie can learn how to play with a toy quickly after being taught. He really likes the toy trumpet. Dobie also likes playing with small balls, toy cars, and watching tv. 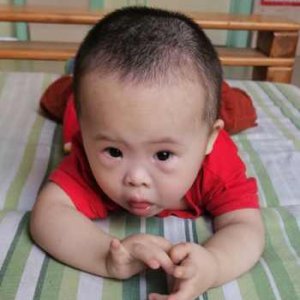