Girl, Age: 7
Country Code: Asia.1: This country is currently not actively processing adoptions, due to COVID.
Region: Asia
Primary Diagnosis: Down syndrome
Down syndrome, heart murmur, abdominal scar (possibly from a feeding tube)
*** I am eligible for an additional $5,000 Grant from Reece’s Rainbow! Through 2022, children with Down syndrome ages 6-9 are eligible for a $5000 Older Child Grant! ***
$55.00
has been donated towards the cost of my adoption!
Inquire About This Child
Available to Single Mothers
Written Update: Colette relies on formula and she cannot swallow food. Our working staff help her with physical therapy every day, aiming at improving her limbs’ muscle strength. In the afternoon, she is taken to the function room, mainly receiving training for her speech and limbs coordination. Colette gets along well with her caretakers and her little friends. She is active and likes crawling around. When she finds something solid, she will climb over it and stand up. When she sees something (such as toys) interesting, she will try to get it by crawling or moving her body with the support of her upper limbs. Now she can crawl or stand up/walk when holding onto something.

Adorable Colletta is quite the giggler! She loves playing with toys and looking at herself in a mirror! Sweet Colletta is described as alert, timid, and quiet. At the time her file was prepared, she was crawling with her elbows alternately and she could sit with support. She often liked to find a special duck toy, which she would put in her mouth to bite. When the duck toy made sound, Colletta would burst into giggles! Colletta receives rehabilitation for language and limb flexibility every morning and afternoon. Although she wasn’t saying words at the time her file was prepared, she was babbling a lot! In addition to having Down syndrome, Colletta has an abdominal scar. A U.S. physician who examined her in April of 2016 wasn’t sure what it was from, but believes it may be from a feeding tube before she was brought to the orphanage. She was also found to have a heart murmur.

During an orphanage visit in April of 2016, Colletta was observed to be a pretty baby girl who was very alert and engaged in her surroundings. While in therapy training, she was very agreeable and went along with the exercises. When sitting up, she looked around a lot and babbled more than any other baby they saw that day. Caregivers said it was typical for her to babble a lot. She could roll over and sit with support. When placed on the mat, she stayed in one place and was very content. Caregivers say she is an easygoing baby. We hope to be able to get an update on Colletta and can’t wait to see who Colletta’s lucky family will be!

There is a $2,500 agency grant for Colletta’s adoption with a specific adoption agency. 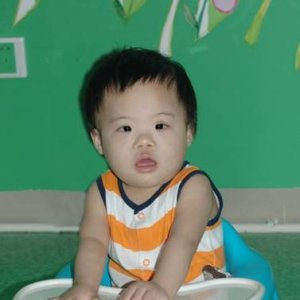 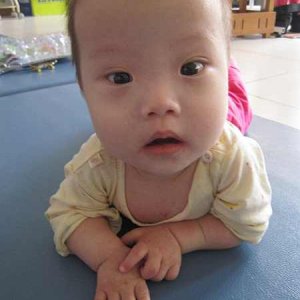