Boy, Age: 11
Country Code: LA-4
Region: Latin America
Primary Diagnosis: Cerebral palsy
**** I am eligible for a $5000 Older Child Grant ****
Grant funds depend on available funding; the link above, shows the current available amount!
To inquire about this child, email childinquiry@reecesrainbow.org ***
Available to Single Mothers
Update October 2022: Breckin is a happy, silly, 11 year old with CP, sensory processing difficulties, and epilepsy well controlled with medication. He LOVES any sort of 1:1 time with his favorite people and lights up the whole room with his smile and laugh when he sees someone he loves. He gives the best hugs, if it were up to him he would be hugging someone 100% of the day! When he is super happy (most of the time) he has a happy dance that he does with a high pitched laugh. He recently started standing in a stander and walking with a gait trainer and has made so much improvement already! His favorite things are any 1:1 time, singing, school, being bounced around on the trampoline, swimming or any water play, going for bike rides in a bike trailor, playing with shaving cream, and cuddling. He can get out of and into chairs well by himself and likes to scoot around on the floor. Most of the time he scoots himself over to get up on the couch or to look in the wall mirror. He loves his caregivers so much and has so much love to give to his future family! He needs help with putting food into his mouth but can hold his water when he drinks independently. He can help putting his limbs through shirts and pants but needs help getting dressed fully. He is in diapers at the moment. He used to bang his head a lot out of boredom and habit, but when he is engaged or in a chair/stander that is more difficult to hit his head against anything he likes to stim by shaking his head around, putting his hands in his mouth, or grinding his teeth. He listens when told to take his hands out of his mouth and can easily be redirected if he is self stimming inappropriately. Videos on request!

Update July 2020: Breckin is such a fun kid who loves hugs and one on one interaction. If you go in for a hug, be ready to stay awhile because he will want to hold you there. He can currently hold his own bottle to drink on his own. He is spending more time in a walker in therapy. He needs encouragement in it, but is getting better. He will walk with you with support for a little ways as well. With more intense therapy, he would really excel in this area. He loves it when his caregivers sing his favorite songs. He really likes hymns as well as the Goodnight Song sung in his house.

Update Jan 2015: Breckin has cerebral palsy, but he can sit up and stand with assistance. He can even take a few steps if you hold onto his hands. He has been receiving regular therapy and loves this time. Breckin is making great improvements – he now has a modified crawl that he uses to get all around his house and can quickly move to wherever he wants to be. He can also pull himself up to stand and does this often. Breckin does not yet feed himself, but he has practiced holding his own spoon and sippy cup and has made great progress. Breckin is a happy little guy who loves to play. 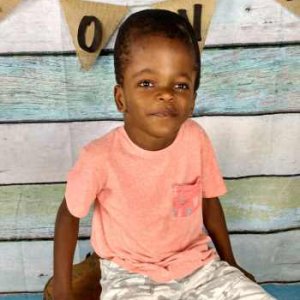