My Family Found Me
Sibling Group
Ages: 8, 8
Region: Eastern Europe
Primary Diagnosis: Cerebral palsy
*** I am eligible for a $2,000 Grant! ***
This grant is offered by Reece’s Rainbow, for children in this specific country. Grant funds are dependent on available funding. For more information, email childinquiry@reecesrainbow.org ***
$2,640.50
has been donated towards the cost of my adoption!
Inquire About This Child
Available to Large Families, Available to Older Parents, Available to Single Mothers
Sizable Grants $2,500+
Anna has cerebral palsy and, as a result, is severely delayed. She and her brother were born very early, each weighing around 2 pounds. Anna is unable to stand. While Anna does vocalize, she is unable to articulate words. She has severe cognitive delays, and it appears unlikely that she will be able to make these up. Anna smiles when she is touched and is willing to play games, but she tires quickly and requires constant stimulation to stay engaged. She is unable to feed herself and is fed through a bottle.

Anna’s twin brother, Alex, has bronchopulmunal dysplasia, cerebral leukomalacia (brain injury from birth), and an intestinal hernia which will likely require surgery. He is described as “lackadaisical” and “good-natured.” Alexander is able to walk 5-6 steps before falling over, and has generally uncoordinated fine motor skills. He does vocalize, but his speech patterns are underdeveloped. The assessment from Bulgaria states that with the appropriate interventions, Alexander could make up for some of his delays, but that his capabilities will always be limited.

UPDATE: 2019 Alex and Anna are twins who are living together in foster care.
Anna has spastic CP that impacts her entire body. When lying on her back, she can raise her right hand to reach for a toy. With some assistance, she can roll onto her stomach and once there, can hold her head up and track objects. She turns her head to sounds. She vocalizes and smiles when she is happy. Sometimes, she reacts to her name by turning her head when her name is called. She will respond to an adult talking to her by making sounds back. She raises her arm when someone waves hello or goodbye to her. She can follow some very simple commands that she repeatedly hears.

Alex also has a diagnosis of CP. Alex is able to walk, though his report indicates that he has a flat food and a possibly shortened thigh length on one leg. He attends an early intervention program, where he is receiving therapy and basic preschool services. He can only say a few words, but is learning to use PECS (picture exchange communication) and is up to PECS level 4, which is the ability to use picture cards to build sentences. He can sort by shape and color, stack blocks, and is learning beginning handwriting skills (tracing, drawing lines, etc). He plays with toys appropriately. He is showing imaginative skills (tucks a baby doll into bed, feeds stuffed animals, etc). He is classified as having a mild intellectual delay based on preschool testing.

Photos and videos are available through the agency.

Annie turns when called by her name. She makes a short-lasting eye contact. She reacts to adults’ speech with cooing and is selective in her interactions with adults. She likes being around other children, observes them and reacts emotionally when they tease her. She vocalizes so as to attract the other children or adults’ attention. She distinguishes the voice and the tone when someone is talking to her, when she is calm or cries. She participates in joint activities in adapted environment with sensory-based activities. She vocalizes and smiles when she likes a certain activity. She likes soft, stuffed animals and silicone sensory objects. During musical and sensory-based activities she reacts with positive emotion and maintains a good eye contact. She turns her head at the direction of the toy, which makes sounds. She follows a moving object from left to right, from above to below, as well as in the space around her. She raises her head and follows a desired moving object. She makes a choice between two objects or toys by reaching or looking intensively at the desired one. She reaches her hand out so as to reach a desirable object or food. She is fully depends on the caretakers for her physical needs. Her postures during the day need to be changed by an adult – she is verticalized and moved in the space. When she is lying, she is able to reach her hands so as to reach an offered toy. She is able to turn from back to belly, albeit with some support. She is able to hold her hands below the chest and uses her elbows for support. She raises her head and follows a moving object from left to right.
Alec walks independently. He is able to squat down and get up, as well stand upright from a sitting position on the floor. His walking has stabilized but he still frequently stumbles and falls. He climbs up and down stairs with support. He is able to throw and roll a ball but has difficulty in catching it. He uses both hands when manipulating objects. His left hand seems to be dominant. He copes with activities that require the use of both hands with each hand performing a different action (buttoning/unbuttoning, inlaying, cutting with scissors, etc.), but still needs some support. His writing skills are in the process of development – he adheres to the border of the paper, he draws horizontal and vertical lines by imitation and a “nest”, outlines a circle in the internal side of a stencil. He draws a sun, balloon, face and follows dotted lines. He understands and follows short, one or two step, instructions, within the context of the situation. He purposefully uses basic gestures, accompanied by words (“End”, “Again”, “Give”). He more often expresses his needs or spontaneously makes comments about things he finds impressive with a word/sentence. He connects two words in a sentence independently, most often memorized phrases. In his therapy he uses an alternative system for communication through pictures (PECS) – IV phase – line sentence and signs of the object are included (color, shape, size). He independently places the words on the line and constructs sentences such as “I want a big train”, “I want a long spiral”, etc. He properly uses “I” and “you” n familiar situations. He plays with toys appropriately. He has acquired basic models for playing but his playing is sometimes stereotypical (he spins the tires of the cars, examines objects with his eyes/mouth). He has good imitation skills and likes playing outside, recreating observed actions. He willingly participates in activities. He watches cartoons and repeats phrases he has heard. He waves his hand to say “Hello” or “Goodbye”. He gives kisses. He looks for other children and plays with them for short periods of time, but communication with them is still difficult. He still has difficulties sharing his toys and needs support in interaction and common games. With the support of an adult he is able to wait for his turn during a joint game with another child. He compares two objects in accordance to external signs (color, shape, size). He is in a process of building concepts about color, shape and size. He knows some quality concepts (big/small, long/short, clean/dirty, etc.). He counts up to 3. He finds it easier to learn when the educational material is incorporated in his everyday activities. 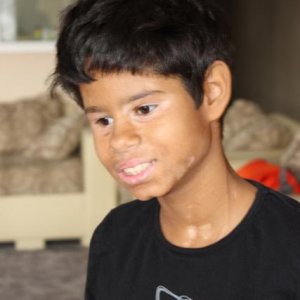 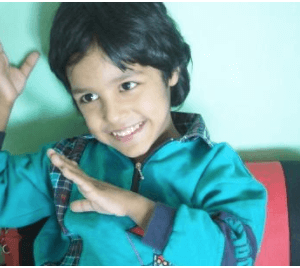