Boy, Age: 13
Country Code: Asia.1: This country is currently not actively processing adoptions, due to COVID.
Region: Asia
Primary Diagnosis: Down syndrome
*** I am eligible for a $15,000 Older Child Grant! For more information or to inquire about this child, please email childinquiry@reecesrainbow.org ***
Available to Single Mothers
Alan just turned three years old, and although he can stand by himself and crawl all over the furniture, he is not quite yet able to walk. His foster father has been taking him on tricycle rides to strengthen his legs and improve his balance. Alan seems to be enjoying himself immensely!

Alan-update
Update 2014:
Alan has truly blossomed! He is very smart and also very clever! With his foster mother’s assistance he can count to ten; she is also teaching him colors and shapes. With his new found knowledge, Alan believes he is now a teacher and he can often be found teaching his younger foster sister a school lesson.

One of Alan’s favorite things to do is to play outside. Although he wishes to play outside everyday, he knows when it rains he has to stay inside and always lets his foster mother know this. Alan has great physical strength and he can run and jump. His favorite game to play is hide and seek. Alan is also a little ham and whenever the camera comes out, he will stop what he is doing and pose. He also has some pretty impressive dance moves. As soon as the music starts playing he will start dancing by shaking his hips. 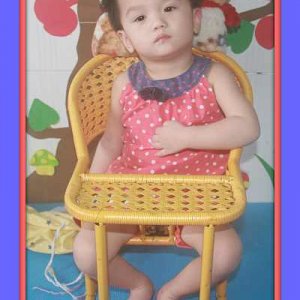