Boy, Age: 7
Country Code: LA-4
Region: Latin America
Primary Diagnosis: Cerebral palsy
Cerebral Palsy and Hypotonia (low tone)
$1,027.00
has been donated towards the cost of my adoption!
Inquire About This Child
Available to Single Mothers
Alan is a smiley, friendly boy who likes to engage with the people around him! Although Alan does not talk, he is very vocal and knows how to communicate. He is good at tracking people and objects with his eyes. At school, he has been working on using an eye gaze program to speak through a dynavox. He needs assistance with holding his head but he focuses really hard and gets excited when he can say things. When asked a yes/no question, he will raise his eyebrows for yes or shake his head for no. He is quite opinionated, especially when he is hungry!

At school he uses his arm moving it along a cookie sheet to spell words, make sentences, answer questions, etc. He also likes to use his arms to reach out and tag you, unplug cords or get cellphones… such a jokester he is! When he doesn’t want to work or he is tired then it is harder to get him to respond.

Alan has a g-tube but does still eat all meals blended by mouth and drinks water well from a honey bear bottle squeezed for him. His g-tube is used to supplement snacks for weight gain, to give him more water and to ensure he gets all his medicine properly. Some times when he is sick or is having a difficult time eating safely by mouth then he chooses to use his tube for meals. This helps us to ensure he is getting enough food/water too. When you ask him, he will often indicate to us he wants to be fed via his tube when he is struggling. Alan was slow to gain weight for a long time. He threw up a lot when he was on a milk-based formula and cried like he was in pain. Since then he has remained mostly dairy free and now his diet is supplemented with real food blends. There has been positive improvement overall!!

In the past, he had a couple unexplained episodes that were thought to be seizures. He is on Keppra but has not had any recently so his medical caregivers will try to wean him off soon to see how he does. The heat does seem to affect him so he is often more uncomfortable/grumpy in the summer months here in his home country. It is no surprise then that he loves when he has a fan by him to cool him down or if he is involved in water play. Swimming in pools or sitting in his water chair are two of his favorite activities to beat the summer heat. When swimming he likes to float on his belly and paddle his arms and kick. It’s a workout with him in the pool because of how excited he gets! With little head control, he has benefited from a float that can keep his head up while he tries to move his arms. He attends therapy four times a week currently. The therapists say he does much better in the stander when he has had his stretching beforehand. Often though he is not a big fan of standing unless someone sits with him and interacts with him.

Alan enjoys being held by his caregivers and going for walks. Going over bumps makes him laugh a lot. He loves to interact with his other friends in his foster family. He will make a great addition to his forever family and has so much potential!! Alan LOVES music and dancing. He gets really excited when people want to sing to him or help him dance. Sometimes if you are holding under his armpits he will lift up his feet like he is trying to walk. He can also flip himself over super fast. He keeps everyone laughing when he is in his good, giggly moods! 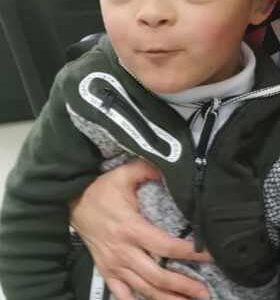