Boy, Age: 11
Country Code: Asia.1: This country is currently not actively processing adoptions, due to COVID.
Region: Asia
Primary Diagnosis: Other Special Needs
Lower limb weakness
**** I am eligible for a $5000 Older Child Grant ****
Grant funds depend on available funding; the link above, shows the current available amount!
To inquire about this child, email childinquiry@reecesrainbow.org ***
Available to Single Mothers
Acer is quite the cutie! Acer is diagnosed as having lower limb weakness. He came into care at the approximate age of two, so he has only been in the orphanage for a little over a year and a half. His nannies report that he has big beautiful eyes and is very handsome….that is clear from his pictures!

When his file was prepared in Oct. 2014, he could stand up and walk while holding onto something or holding someone’s hand. He could also walk by pushing something like a small stool. He is cooperative and can help put on and take off his own clothes and shoes. Acer’s favorite toy is the wooden rocking horse! He can get on and off of it and likes sitting and riding on it. Acer likes to hold the milk bottles to help feed the younger children. He also likes playing outside. The slide and swings are his favorite, but he enjoys playing with balls and toy blocks too. He can build a tower with 5-6 blocks. He doesn’t want the other kids to touch his blocks or he’ll cry. Acer likes taking baths and playing in the water. He eats noodles, eggs, and bread regularly.

Acer receives some physical therapy, but would benefit so much more from the love and support of his own family. 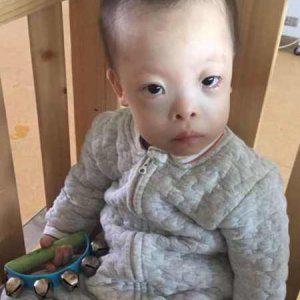 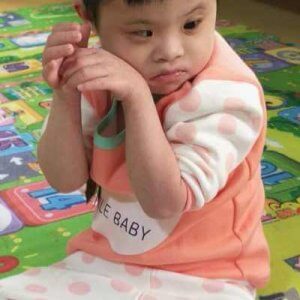