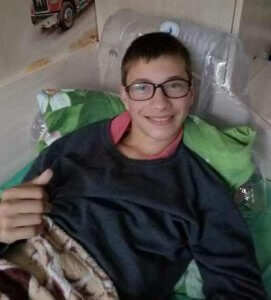 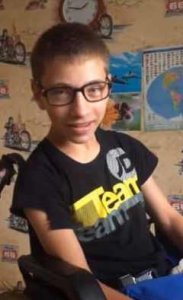 From a volunteer who visits the orphanage:  When he was 14 his mother placed him and his siblings in the orphanage, after her husband left them and signed away her rights to him, and went to Italy to work for a year. When she returned she took the siblings home, but not visit him. She does not visit him and her phone calls are becoming less and less. Upon arriving at the orphanage, he became friends with another boy who was adopted shortly before turning 16. They chat on FB. He has asked me repeatedly to find him a home in America, or to adopt him.

He has friends from the community who visit with him, and explained the entire adoption system/situation to him. He wants out and should be out. He has spastic cerebral palsy in all 4 limbs. He is in 7th grade, dreams of going to Paris, and has taught himself English. He translates or the staff! He is very upset about not having a walker there or receiving therapies. I have seen the’spunk’ starting to disappear. He is so very kind and compassionate. He has been raised Greek catholic, read the bible daily and loves to sing hymns and christian songs.